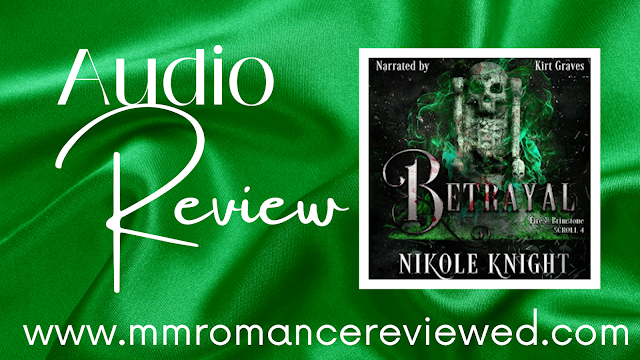 Lesetiger says that Betrayal has "Outstanding narration - I love this series!"
From the blurb: 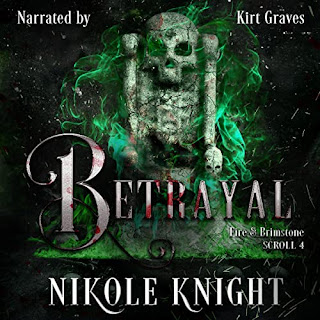 Riley finally has love within his grasp, but the only way to protect it may be to let it go. With no more rules standing in their way, Riley Shepard and his angels test the boundaries of their new and unconventional relationship. Jealousy and doubt lie in wait, threatening to ruin the tenuous ties connecting them. But some things are always worth fighting for.
As the forces of Hell conspire against them, their list of allies dwindles, and the question of who to trust becomes an issue of life and death. There is always more to give, and to protect what Riley loves most, he must make an impossible choice. If the price for their lives is breaking their hearts, then Riley will pay it. There is no love without sacrifice.
Betrayal is the fourth book in the M/M+ harem/poly romance series, Fire & Brimstone, featuring hurt/comfort, insatiable guardian angels, sizzling encounters, and an unlikely hero who comes into his own.
NOTE: Betrayal does end in a cliff-hanger.
Trigger warnings include: violence, gore, death, and off-screen sexual assault.
Lesetiger's Review:
I love this series - and I love the audiobook version of this series even more, which makes the already epic series even better.
It was very nice to watch Riley develop. This time around, the focus is on Riley's relationship with his angels. He has single dates with Noel, Jai and Gideon and each one goes differently. But it's not all sunshine and I think the relationship of the four is portrayed very realistically and authentically.
I found the romantic moments with Gideon especially sweet, as he finally manages to let his walls down to experience some happiness. That this is not so easy is quite understandable given his dramatic past. However, I also liked how things developed between Riley and Noel and Riley and Jai.
I was really happy and content and then the last chapters came and disaster struck. Dramatic scenes played out and my heart bled, no it was ripped out. What a roller coaster ride of emotions!
Kirt Graves is amazing! He brought the characters to life and read the book very vividly. His voice fits each character perfectly and he is a master at portraying the emotions expertly. Kirt makes the book a true listening experience that had me hooked from the beginning. Thank you for this absolutely outstanding read.
And now I'm totally jittery because after the cliffhanger at the end, I'm now eagerly awaiting "Redemption"!
Rating: Overall 5 stars, performance 5 stars, story 5 stars
Betrayal  is currently available inAudiobook,  e-book, hard cover and paperback and can be read as part of your Kindle Unlimited Subscription