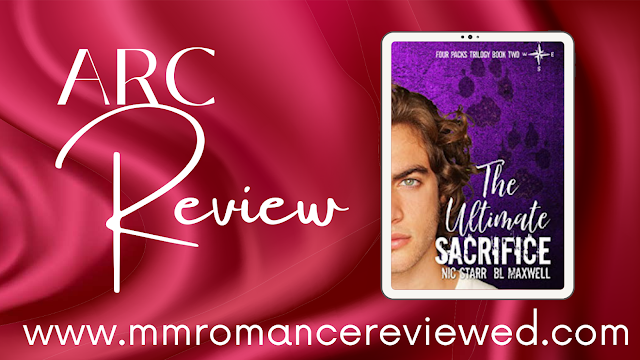 Zander and Marrock from The Slow Death feature throughout The Ultimate Sacrifice as they try and heal their friend from what could be a death sentence.
From the blurb: 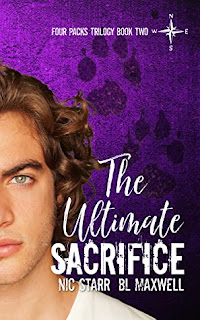 Grady Summerville is facing a slow and agonizing death, but has come to terms with his disease and doesn’t fear dying. However, fate has other ideas, presenting him with a future thanks to Max Steele. Grady owes his very life to Max, and as his health improves, finds himself falling head over heels with his savior.
Max Steele has been forced to leave his pack and everyone he knows to move to the West Territory to be a blood donor for Grady. He knows it’s the right thing to do, but it doesn’t mean he has to like it.
As tensions escalate between the two packs, Max finds his loyalty tested and is torn between following his alpha, or following his heart.
If Max doesn’t make the sacrifice then it will be Grady making the ultimate sacrifice and paying with his life.
Jacquie's Review:
The Ultimate Sacrifice was really sweet compared to the steam and light antagonism of book 1.
Grady is dying from TSD and needs Max to come from the West pack to save his life. Grady hates that he's being such an inconvenience to Max but it is the only way for him to have the treatment.
This plot follows on from book 1, where they were trying to find a donor and having issues with Max's pack who don't believe in alliances with the other packs.
Max was an utter sweetheart and though he knew about his mate bond, he allowed Grady to recover since he was worried about clear consent and if they bond was making them feel things. Max and Grady communicated well and were really sweet together.
Low on steam, but that's because of Grady's illness, and also low on angst, but it is a great quick read
Rating: 4.5 Stars
Laora's Review:
Let me start off by saying wow this second book brought it.
I enjoyed how the authors developed the characters and story further. Max and Grady are fated mates but do not know if that is true or if it is a side effect of the treatment Grady receives.
Also the tension between the territories is ramping up as a side story. I can't wait to read how this series finishes up.
Rating: 5 Stars
The Ultimate Sacrifice is currently available in e-book and paperback and can be read as part of your Kindle Unlimited Subscription
4.5 stars 5 Stars ARC Jacquie KU Laora low angst Paranormal Series Shifters slow burn sweet