Truth or Dare (Shadows of London #4) by Ariana Nash 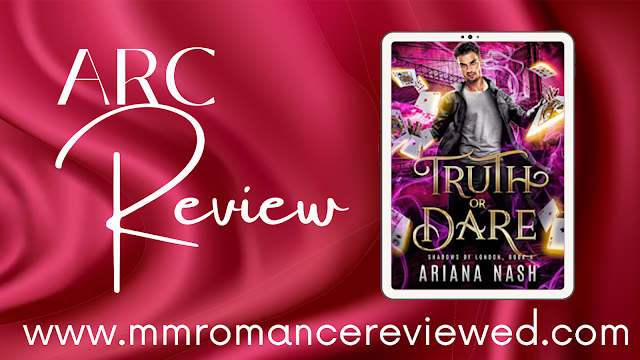 Truth or Dare takes us to America, where latents are second class citizens 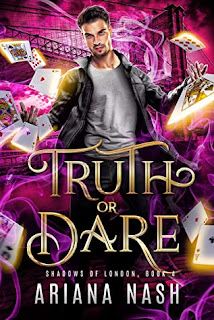 America. The land of the free. Unless you're a latent.

Kage is missing. Alexander Kempthorne would prefer he stay that way. Life at the new-look

Kempthorne & Co agency is difficult enough without adding a missing American to the mix. But John "Dom" Domenici won't abandon someone who was once their friend, even if Kage is technically an enemy.

But as the team investigate Kage's disappearance, his traumatic, hidden past comes to light. And a missing persons case soon turns into a fight for survival for Dom and Kempthorne, in a land not-so-free.

Please note the Shadows of London series is predominantly set in London with British characters. Although the series has been edited in US English for the US market, to include US spelling and grammar, many English slang words and spelling remain as part of the character of the work.

America is not the land of the free. It's where being born a latent means you are subjected to severe punishments for minor or even imagined infractions. You are restricted in where you can go and what you can do.

With Kage missing Dom cant help but worry. While Dom doesn't have romantic feelings for Kage anymore, he can't let the man go and he needs Kempthorne's help to hunt for him, which sets a long line of dominoes tumbling.

This book is far steamier than the previous ones. Kempthorne and Dom together have combustible chemistry leading to a number of hot scenes and a connection that speaks of a deeper purpose.

My mind is spinning from the implications of what has happened and the finale is going to be something wild. No one is safe in an Ariana Nash book!

Dom and Kempthorne have made too many enemies for this to be anything but world changing and I can't wait for it.

I held off my review for a couple of days because I had a lot of thoughts about this one, which really is the whole point of reading books and getting into the story. There's nothing better than being so invested in a story that it sets you to thinking about it once you're done with the book.

I might be done with this book but I'm looking forward to the whole thing wrapping up. This whole series has been a ride, ups and downs and twists all over the place. I've enjoyed it on the whole, but I think what I get out of it (and I think especially this book) isn't what others do. Quite what that says about me, I really do not know.

So, I like John Domenici. He's such a good central character and I'm glad the story is built around him. He's such an intriguing character and can't help but see the best in people - which has cost him dearly more than once. All I really want in the end is for John to get his happy ending, he's been through so much at this point, if anyone deserves an HEA it's John.

Now, this is where you're going to hate me. I thought about this long and hard and here we go. I don't like Alexander Kempthorne. It took me a while to realise that he just annoys me intensely and I don't think he's a good fit for Dom. He's lied to him from the start, continues to do so and has bought him twice (I think that irks me more than anything else). He's arrogant, high handed in his dealings with Dom yet entirely depends on Dom to make him happy, and this isn't a good relationship. Not saying Kage is better because he's not.

I like that we got a glimpse into Kage's life and discovered why he is how he is. I know, I'm supposed to boo Kage and cheer for Kempthorne but I can't. They're too similar - you can't tell me if the situation was reversed, and Kempthorne was forced to sell Kage out that he would hesitate to do it. I get it, I don't like it but I get it. Neither of them are good for Dom and honestly, I'd be happier if he ended up on his own rather than with either of those two (although it's going to be Kempthorne).

Relationships notwithstanding, I liked the story of them in America, I got angry when I should have with Trent, and just wanted things to work out. Bring on the finale because I'm ready for it.