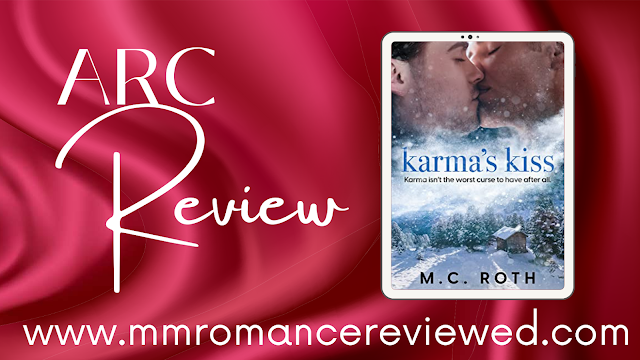 Zack is running when his car breaks down in a snowdrift. Thinking that this is the end he is surprised when he is rescued by Eric and taken to his minimalist cabin in the woods.
From the Karma's Kiss blurb:
Karma isn’t the worst curse to have after all. 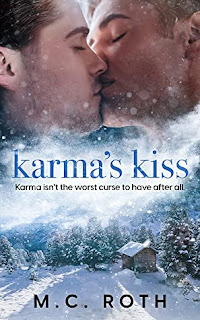 Zack is running from his family, his past and a curse that has tainted his life since childhood. Fleeing his temporary home for the sake of his ex-boyfriend, Zack becomes stranded in a snow drift in the middle of nowhere, wearing nothing more than a spring jacket and an old pair of running shoes. Resigning himself to freezing to death, he is rescued by Eric, an irresistible man who treads the line between kindness and discourtesy.
Zack quickly realises that Eric’s home is a different kind of frozen hell. There is no electricity in the tiny one-room cabin, no running water and definitely no Wi-Fi.
But Eric is more than just a man. He is the only one who seems to be immune to Zack’s curse, and he has secrets of his own. Eric may be more dangerous than anything Zack has ever seen before.
Reader advisory: This book contains scenes of violence and the death of a secondary character.
Reds Book Reads Review:
Karma's Kiss was a really interesting book and I’m still not sure how I feel about it. I loved the mystery between the two men and what the paranormal element was. The relationship between them is very intense and there is a lot of biting in this story! I enjoyed the book and it is very well written but I still have slightly mixed feelings with this one.
Rating: 4 Stars
Jacquie's Review:
Karma's Kiss is a steamy forced proximity story with a paranormal element.
Zach is saved by Eric who initially tried to keep Zach at bay despite their mutual attraction. There were quite a few kissing scenes, a lot of biting and Zach getting denied at first.
I was really interested in what Eric was but never really got much of an answer to what Zach was and the origin of his curse.
Rating: 4 Stars
SNik's Review:
Zack is constantly on the move due to his curse, because for some reason anytime someone treats him badly something very bad happens. When Eric rescues Zack from being stranded in a storm, Zack’s curse remains quiet but he is unsure as to why. Eric himself is hiding something, and Zack doesn’t understand why a gorgeous man is living in the middle of nowhere like a hermit with no electricity. Instant attraction with a lot of sexual tension, the story is a slow build to discovering that neither man is what he seems. More background on Zack and Eric would have been appreciated and a more clear world building would have made this story even more interesting and substantial. Intriguing read that brings together two characters that are perhaps best being together once they leave the world outside behind.
Rating: 4 Stars
Heather's Review:
Karma's Kiss was very different than M.C. Roth's first MM romance and I honestly clicked on it without reading the blurb because I'd loved the first book I read... this one is paranormal, and not typically what I would pick up, so I felt a little behind on the world building and the different elements of the book.  The relationship between the MC's was a rollercoaster in itself and that was definitely the highlight of the book, but I wanted more!  I wanted more worldbuilding, more depth related to what Zack was and why he was the way he was, and also more depth into who and what Eric was and why they were compatible... this book felt like the first part of a duology or single couple series but there's no indication from the author that there will be more... this book also doesn't explicitly share a HEA scenario, which left this reader craving more.
Rating: 4 Stars
Want more?  Check out the excerpt and giveaway opportunity by visiting our release blitz post: 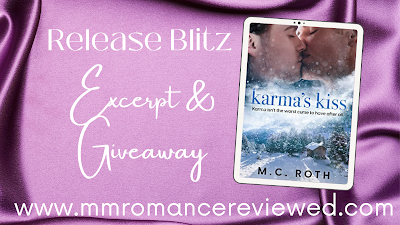