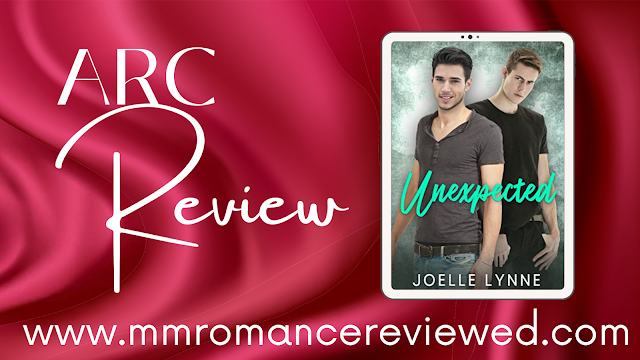 If you read Joelle Lynne's first book, Worth The Wait, you might have been expecting another sweet romance, but if you were, than Unexpected was probably even more Unexpected than you'd imagined... 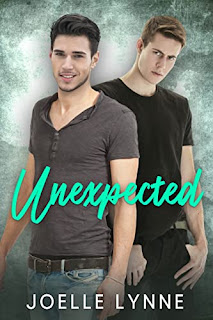 Christopher was content to never take a relationship seriously. Over the last year, he slowly started spending time on his own. Without his best friend to keep him out of trouble, Christopher finds himself thrust, head first, into a situation he never saw himself being in.
Gabe was in trouble. His pushy ways finally caught up to him and forced him to move. How he landed in such a small town was a joke, but he was going to make the most of it. When a night out to get acquainted with his new home takes a turn for the interesting, his past mistakes might just come back to haunt him.
Christopher shouldn't be interested, Gabe shouldn't be pushing it, but what if it was always meant to be? Who cares that it was completely Unexpected?
Unexpected is the second book in a series after Worth the Wait and follows the story of Michael's brother, Christopher. It can be read as a stand-alone, however, reading the first book is encouraged.
Heather's Review:
Getting to know Christopher in Worth The Wait, you saw inklings and cracks in his all straight persona, so it wasn't unexpected that he'd get his own book in the Worth It series, but whoa... Joelle Lynne starts the book off with a bang!
Unexpected is the older, steamier story with a more dramatic coming out and tension between both the MC's and between Shane and Gabe & Christopher...
Don't get me wrong, this is still a New Adult/younger adult story, but since both characters are more mature and also just seem to have a chemistry that ignites.  The spark that was missing from book one is definitely present in book 2 - and it ignites the chemistry....
Unexpected could be read standalone, but I think you get to understand the depth of several characters better with reading both books in the series.
Rating: 5 Stars
Amy_tbs' Review:
This was a quick and fun double Bi-awakening story. I loved the first book in this series and I couldn't wait for Christopher's story. I couldn't believe Shane's attitude towards Gabe it was completely at odds with the first book. He was so sweet in that but came across as completely hostile in Unexpected. This gave some diversity to the characters though and the aurthor handled the dynamics of the characters brilliantly.
I absolutely loved Gabe and Christopher together they had so much chemistry. Unexpected is #2 in the Worth It series. The ending was so good and I can't wait for the next installment.
Rating: 4 Stars
Unexpected is currently available in e-book and paperback and can be read as part of your Kindle Unlimited Subscription