Trial By Fire (Shadows of London #3), by Ariana Nash

"Men weren't meant to be gods. The boy who was made. The man who had failed. Me." Trial By Fire brings this story arc to an end but this isn't the end for Dom. 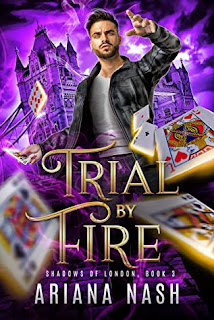 The third book in the thrilling Shadows of London series.

Action, MM romance and adventure combine on the streets of London. Time is running out for John "Dom" Domenici.

It's not just Kempthorne's secrets bubbling to the surface of London's streets ...

Outmanoeuvred at every turn by the figure known as "M", only Alexander Kempthorne can free Dom, but juggling the horrors of his own past, containing a rising preternatural threat and the twisted machinations of "M" might just be too much, even for Kempthorne. Can Kage Mitchell be trusted to help?

Alexander Kempthorne lost an agent before. He'll not lose another. He'll do anything to save Dom, and if that means revealing who and what he truly is, then his time has come.

Trial By Fire was basically a non-stop roller coaster of a book. Just when you thought things might be finding a lull in the craziness, Dom or Kempthorne would get sucked into some other life or death situation. Speaking of Kempthorne, being in his head for a large percentage of the book was an amazing treat. He's such a contrast to Dom, who is always looking for the good in others. Kempthorne is much more cynical. Having his POV means we also finally get a real clue on his feelings for Dom. As someone who has been team Kempthorne from book 1, I wasn't disappointed. The person who did disappoint me was Hollywood. I still can't tell how much of a liar he really is. The man is a good actor I'll give him that and he excels at causing doubt about his true intentions. The problem is his expertise is needed when it comes down to finally blowing the mysterious M and his nefarious plans wide open. M seems to always be one step ahead and has no qualms sacrificing whoever he needs to for his perceived greater good. I hated him. There are still 3 more planned books in this series, but the major storyline from the first 3 comes to its conclusion in this mid series finale. As usual for Nash, there are plenty of twists and turns along with a dash of betrayal. I mean it wouldn't be an Ariana Nash novel if someone didn't surprise us and betray our main MC. It's like her calling card if you will. Even though the major plot is finished, we finish this one with quite a few questions and I cannot wait to see what adventure Dom gets up to next.

Though Trial By Fire is the finale for this particular story, it isn't the end for Dom and Kempthorne just the end of this particular story arc. Told in dual pov, we open with Alexander Kempthorne trying to get Dom out of Wordsworth using any means necessary. It was fantastic to see everything that simmered underneath the stoic exterior. I loved having his pov and seeing Dom from his eyes. Keeping this spoiler free - a number of characters show their true colours. General death and destruction occur and there's a bit of steam and a lovely ending. I'm glad that there is more from this world as Dom and Kempthorne have such great chemistry and the world with latents has so much potential for more stories.

Rating: 5 Stars
Sheena's Review:
Action, MM romance and adventure combine on the streets of London.
Time is running out for John "Dom" Domenici. "Don't really know where to start with this one, I've held on to this review for a couple of days to let the story settle with me, there's quite a bit going on with this one. I've flagged this for spoilers as I don't think I'll get through this without inadvertently ruining it for someone (which I'd hate to think I'd done).
This is a direct follow on from the last book, and a continuation of the overarching story from the first book, these are meant to be read in order. When we left Dom in the last book he wasn't in a good place and it's only got worse for him. This time we get more Kempthorne though, the book starts in his viewpoint and it's different to get Kempthorne's view on things, and get to know him a little better. I'd like to say I warmed to him a bit more but I'm still not sold on him or sold on him and Dom as a couple (Yes, I know I'm in a minority of 1 person with this, so sue me).
I liked that Dom was the one to rescue himself though, this is the Dom I've come to love and know through these books and he remains a compelling MC and the reason I love these books so much. Dom is the heart of the story for me and my favourite parts of this book were Dom's. My jury's still out on Kempthorne (not sorry).
I was shocked with the twist in the story, that one I didn't see coming and it made me so sad, I've come to love these characters and hated seeing one go in such a manner, and I'm glad M got his comeuppance eventually. I'm also glad Dom is such a decent person that he is going after Kage even after everything he did too.
So happy there are two more books because I'm not done with Dom yet.
Rating: 4 Stars
Trial By Fire is currently available in e-book and paperback and can be read as part of your Kindle Unlimited Subscription