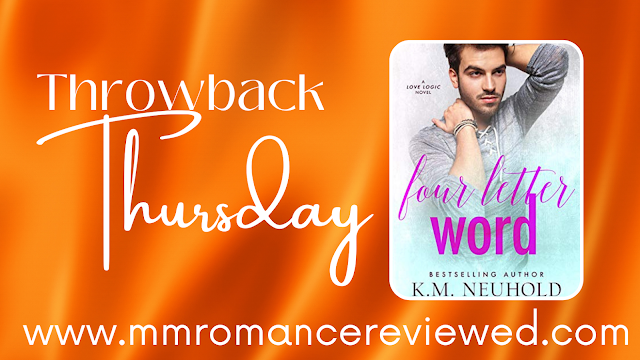 We're celebrating another Book Anniversary today!  I can't believe it's been two years this week since Four Letter Word debuted... The whole Love Logic series is on my re-read list (if I ever get through my ARCs and new release TBR), but Four Letter Word is one of my favourite polyamory stories... 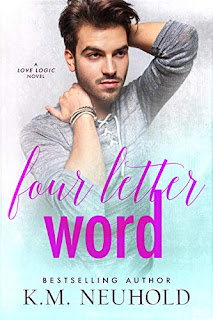 Relationships are hard enough between two people...can the four of us make it work? Or is love nothing more than a four letter word?
Polyamory...the first time Riot says the word, it feels like everything slots into place. Maybe I’m not greedy for loving both of my best friends at once…
For most of my life I didn’t think I could ever have the kind of love I’ve been dreaming of, but somehow a sexy bartender with a major sweet tooth is making it all seem possible.
Maybe Riot is right, our capacity for love is bigger than most people let themselves see. But will Leo and Hudson feel the same? Will they be willing to try to build this beautiful, complicated life with me?
If I can keep them from ripping each other’s heads off that is...
*** This is book two in the Love Logic series and can be read as a stand alone. This is a MMMM story full of love and heat.

“Mmm, what smells so good?” I ask, coming out of the bathroom after a shower.

“Riot was so excited about my brownies last time, I figured I’d make some more sweets,” Leo answers, popping his head out of the kitchen.

“You didn’t have to do that. And are you sure it’s okay we’re hanging out here tonight? You and I haven’t even made time for our date yet, and I don’t want to be parading Riot around in front of you if it’ll make things weird.”

“If there’s going to be a parade, that might be weird,” he jokes before vanishing back into the kitchen. “Stop worrying so much; I want to get to know him better. We’re both dating you, and I think I’ll feel a lot more comfortable the better I know him.”

“If you’re sure.” I step into the kitchen behind him and peek at the goodies he’s making. “Ooo, are those turtle brownies?”

I wrap my arms around Leo from behind and nibble at his neck. Even a week since our first kiss and I can’t believe I get to touch him this way. After all the years I spent dreaming about it, it doesn’t seem real.

“The brownies are probably sweeter than I am,” he laughs.

“I highly doubt that.” I continue trailing kisses up to his jaw and then to the spot right behind his ear that I’ve discovered makes him squirm every time. I slip my hand under his shirt and splay my fingers over the hard planes of his abs. We haven’t done more than make out so far, and I’m not sure what I’m waiting for, except that sex kind of fucked things up between Hudson and me, and I’m terrified it could do the same with Leo.

He moans, grinding his ass back against my hard cock. I press back, imagining how good it would feel if we were skin to skin, instead of having all these annoying layers of clothing between us.

“I love touching you,” I counter, grazing my teeth over his earlobe.

Before I can consider throwing caution to the wind and finding out exactly what sex might do to our relationship, there’s a knock at the door.

“That must be Riot,” Leo says, still sounding breathless.

“I’ll get it.” I nip at his earlobe one more time before releasing him to answer the door.

It’s not Riot standing on the other side though.

“Hey, do you have a second to talk?” Hudson asks, his hands shoved in his pockets, his shoulders slightly hunched, a look of uncertainty on his face. I’ve never seen him like this. The Hudson I’ve always known is confident to the point of being cocky.

“Um,” I glance back over my shoulder, expecting Leo to appear and start acting like an asshole at any moment. “I have a second.” Instead of inviting him in, I step out into the hallway and pull the door closed behind me. “What’s up?”

“I don’t know; that’s what I’m here to find out.” He fixes me with a look that holds me in place, his eyes boring into me like if he stares at me long enough, he might be able to read my mind.

“I don’t really know how to explain it,” I answer. Or maybe it’s more that I’m not ready to have this conversation with him about how I really feel.

“Is Riot your boyfriend now?” he presses.

“We haven’t talked about labels, but we are seeing each other,” I explain, and Hudson’s shoulders deflate even more. Even if I’m not ready to profess my love to him, I can at least give him honesty about this. “But I’m polyamorous, we both are, so it’s not exclusive.”

His eyebrows shoot up and understanding dawns in his eyes, a slow smile spreads over his lips. “I miss you, Bish. I fucking miss the hell out of you.”

My heart squeezes, and I reach for my best friend, grabbing his hand to feel a connection. He tightens his grip, swallowing hard, his Adam’s apple bobbing.

“I want to have a better conversation with you, somewhere other than the hallway, maybe I can stop by your place sometime this week?” I don’t have the first clue how this is going to work with Leo and Hudson still hating each other, but I’ll cross that bridge when I get to it. For now I want to focus on the warm happiness spreading through my chest at the idea of having everything I never thought I could have.

“I’d like that,” he agrees, using our joined hands to pull me closer until our bodies are flush against each other, his half-hard bulge pressing against mine. “I’ll be honest, Bish, I’ve always thought of you as mine, so I’m not sure how I like the idea of sharing. But, if it’s between that and not having you at all, I’m sure we can work it out.”

“It’s not about sharing, Huds. I’m not a possession,” I correct gently.

In the blink of an eye, his lips are on mine, rough and demanding as they always are. He kisses the way he seems to live his life, taking what he wants without apology. He thrusts his tongue into my mouth, and I kiss him back with everything I have. The way he kisses, the way he tastes, the way it feels as he backs me against the door and grinds his hardening cock against mine, it’s all almost too good to be true. There’s no way he wants me the way I want him, the way I need him, but maybe if Riot can fall in love with me, it won’t hurt so much to know that Hudson never will.

Four Letter Word is currently available in e-book, Audiobook and paperback and can be read as part of your Kindle Unlimited Subscription