#ThrowbackThursday: Coast to Coast by R.J. Scott and V.L. Locey 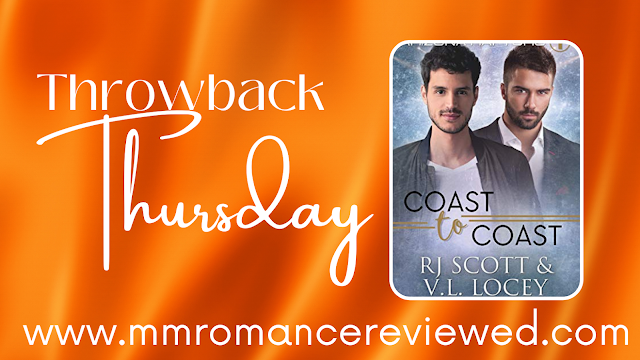 I can't believe it's been two and a half years since Coast to Coast debuted in September of 2019, but this first book in the Arizona Raptors series is hot as h-e-double hockey sticks and worth the read or the re-read as the case may be...
From the blurb: 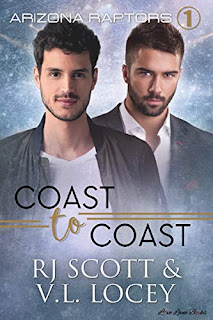 ✔️ Opposites attract
✔️ Snarky team owner disowned by family
✔️ Trapped by a stipulation in a will
✔️ A coach not afraid to make changes
✔️ No-Tell Motel sex
✔️ Passionate debate and stubborn hotheads
When opposites attract, this bottom-of-the-league team will never be the same again.
A stipulation in his father's will forces Mark back into the arms of a family that disowned him and leaves him one-third owner of a hockey team facing financial ruin. He doesn't even watch hockey, let alone like it, and wants nothing more than to head back to New York. Then there's the new coach, a stubborn, opinionated, irritating man with superiority issues and questionable music taste. Butting heads with Rowen becomes the new normal, but it comes with passionate debate and an all-consuming lust.
Challenged to rebuild one of the worst teams in the league into a future cup contender, Rowen can't pass up the opportunity. Never in his twenty years of hockey has he ever seen a team managed so badly or coached players overflowing with resentment and bigotry. Yet there's something about this team and this city that compels him to roll up his sleeves and start dismantling. If only Mark, one of three siblings who now own the Raptors, wasn't so damned rock-headed yet so damned appealing his job might be easier. It doesn't look like either is willing to give in, but one night in a dark, desert hotel changes everything. "
Exclusive Excerpt:
“You can’t guilt me into this, Jason. Dad threw me out at sixteen, with no money, no idea of what to do, and I hitchhiked my way to New York. I worked my butt off to make something of myself there, and Gilded Treasures is more than enough to support over three hundred staff and models. I made something of myself despite dear old Dad, and I owe this family nothing.”
“What about Mom?” Cam snapped.
“The same woman who stood next to Dad and watched him kick me out, then ignored my calls and cut me out of her life as efficiently as if she’d used a blade?”
“She’s not well,” Jason said, tiredly.
A small prick of concern pierced the act I had going on, but I wasn’t going to let it sway me. She had washed her hands of me a long time ago, and she meant nothing to me now. I pushed aside that traitorous sympathy and focused back on Cam and Jason. “Maybe she should stop drinking,” I said.
That was clearly the wrong thing to say. Cam dragged me out of the chair and walked me backward until I hit a wall. He lifted me onto my toes, easy when he was built like a linebacker with all the physical qualities of the Incredible Hulk.
“Mom has cancer,” he said, and that poke of concern became slightly bigger.
“Cameron, stop,” Jason ordered and pushed his way between us. I’m not sure why he was stopping Cam from beating me up. He’d never done it when we were kids, so why now? “She didn’t want him to know,” he said as he shoved Cam backward.
Yep, and there it is, the cherry on the icing of the proverbial shit cake. I brushed myself down.
“Of course, she doesn’t want me to know. She probably assumed I don’t care, and she was right.” I feigned a complete lack of concern, but even after all these years, it was her betrayal that hurt the most.
Cam moved in front of me, although he kept his distance.
“She didn’t want her illness to sway you one way or another with what Dad put in motion.”
I looked at my nails and huffed. “And that’s the story she’s sticking to, right?”
Cam slammed a hand into the wall next to my head. He was taller and bigger than me, just like Jason, and if the two of them decided to take it upon themselves to kill me, they could. At five ten, I was completely vulnerable.
I wasn’t the same stupid kid who’d left the house at sixteen. Not the one who’d adored Cameron and admired him as if he was a shiny, heroic genius. Or who’d been the only one to stop Jason from losing his cool all the time.
I was Mark Westman-Reid, twenty-six, owner of a thriving modeling agency, an apartment, with a scarlet Lamborghini parked outside the mansion to prove it. Not to mention owning a loft looking out over Central Park or having a Porsche that sat in the garage as a spare.
That Mark was a very different person, and my brothers needed to know that.
“One year,” Cameron said and closed his eyes briefly.
“What about Leigh? What is our sister’s role in this?”
Jason and Cam exchanged looks, and I’d have even gone as far as to say they both appeared regretful.
“You know Dad just wanted to look after her,” Cam said finally. Then he changed the subject. “One year as part owner of the Raptors is all the will states. The three of us can fulfill the conditions of Dad’s will, and we’ll buy you out.”
“Buy me out? Huh. What with?”
The family had invested in the Arizona team before I’d left home, and even though I wasn’t a hockey fan, I was a businessman, with advisors and investors, and my own goddamn corner office. I knew business, and I didn’t have to be a fan of hockey in general or the Raptors themselves to see that the team was failing.