The Trail Boss and the Brat by Jackie North 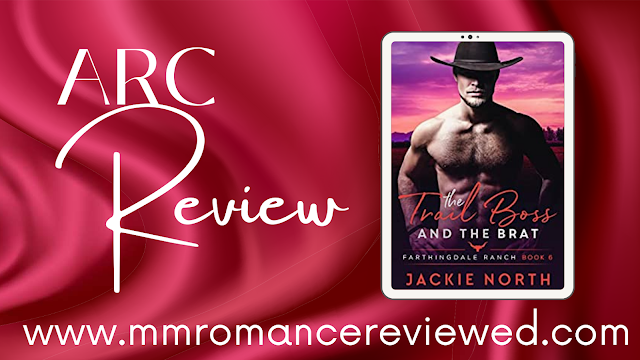 The Trail Boss and The Brat is the final book in the Farthingdale Ranch series and we finally learn about Quint's history before the ranch and watch him find his HEA.
From the blurb: 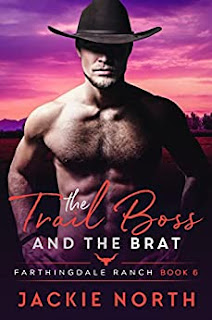 Even a rugged heart can be broken, but can it find love again?
After a fierce betrayal, Quint closes off his heart, walking the earth alone. He can’t trust anyone, even if they need him. He can’t, he just can’t.
He’s designed his life to follow a steady, even cadence. There are rules.
Rule Number One - Don’t mess with Quint.
Rule Number Two - Don’t disobey Quint on a trail ride.
Rule Number Three - Don’t ever forget rule 1 or rule 2.
Then along comes Ashley, who doesn’t follow any rules, especially ones that keep him from getting exactly what he wants.
The Trail Boss and The Brat is a gay m/m cowboy romance with opposites attract, fish out of water, grumpy/sunshine, rugged meets bratty. A little sweet, a little steamy, with a guaranteed HEA.
Heather's Review:
Quint has been one of my favourite characters throughout the Farthingdale Ranch series - almost single-mindedly committed to the ranch and the trail ride program, and to 'parenting' his boys... so it comes with no real surprise, but a chuckle for sure, that the man to crack Quint is a brat...
I love the way Ashley is written, young and directionless, but not bad or spiteful.  His obliviousness isn't malicious, so you end up rooting for him, especially when he reacts to kindness.
The Trail Boss and The Brat truly is a farewell to the Farthingdale series and brings other dangling threads together and celebrates the ranch and it's history.
Rating: 5 Stars
The Trail Boss and The Brat is currently available as an e-book and can be read as part of your Kindle Unlimited Subscription
5 Stars Age Gap Cowboy Grumpy/Sunshine Heather KU Opposites Attract Series