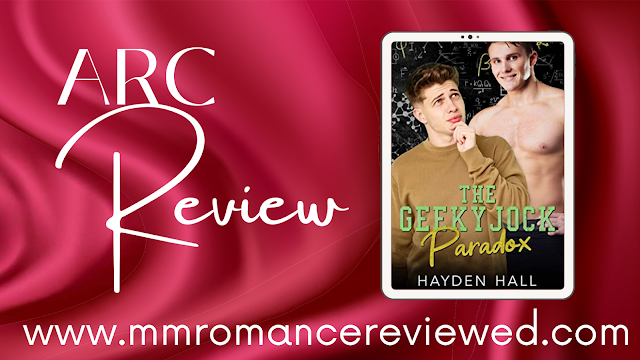 The Geeky Jock Paradox is a sweet HEA to Hayden Halls College Boys of New Haven series. We wouldn't have expected anything else!
From the blurb: 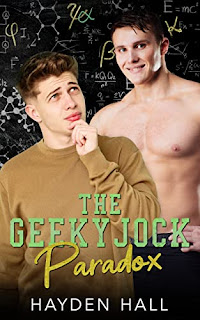 History will repeat itself if I fall for another straight(ish) guy.
Isaac
When my roommate-to-be opens the door wearing nothing but a wet towel and a smile on his face, I only know one thing for sure: my world is about to be turned upside down.
A wrestling jock, a hottie, and as straight as a plank, Hunter is not the guy I should want. But all the shoulds and shouldn’ts fly out the window when it turns out that Hunter is actually a huge geek and not nearly as straight as I thought.
The fact that my high school crush asked me to wait for him until after college only makes my problems worse. But some terrible timing and an unlocked bedroom door end up being less of a problem than the ticking clock.
Can this college-only fling really be all that I have ever wanted?
Hunter
My new roommate is a total cutie, which is the weirdest way to describe a guy when you’re straight.
The more time I spend with Isaac, the less certain I am about everything I thought I knew. Either I am not myself, or I never have been. The weird thing is, I’ve never felt more alive.
It doesn’t matter, though. A no-good, terrible, horrible guy from his past leads him on with the sweetest promises and I’d be a fool to get involved.
Yet I need to have him, even if it’s for a little while.
The Geeky Jock Paradox is the fifth and final book in the College Boys of New Haven series. It's the perfect match for all fans of college MM romance, high steam and low angst, bisexual awakening, and nerd/jock pairings. It features the sweetest the-right-one-was-there-all-along moment and a very happy ending. All College Boys of New Haven books can be read as stand-alones and in any order.

My favourite of the series!

What I didn't expect from this book was the depth of feeling. Matt made me so angry and I was worried for Isaac, that he was going to get his heart broken. I was drawn in by the characters and read the book almost in one sitting.

Isaac and Hunter had an instant connection but this is very much a slow burn with a decent amount of heat. Their arrangement to explore this was adorable and though it was kinda obvious how it was going to end, I still felt every part of the journey.

Oh and I cried, twice. It's been a while since a book affected me so much. The language and descriptions were beautiful and dreamlike and I fell in love with the characters as they fell in love with each other.

Heather's Review:
I wasn't sure if I liked Isaac at the beginning of the book, pining for a high school crush that was prepared to settle for him after sowing his wild oats in college...  but I did immediately fall in love with Hunter - so genuine and sweet.
While The Geeky Jock Paradox is the finale to the New Haven series, it can easily be read as standalone.  It was well paced, with a bit of sizzle than a slow burn and developing friendship to lovers journey.  I definitely became more engrossed in the story as it went on... it was a sweet HEA to the series.
Rating: 4 Stars

This series is full of sweet romance, steam, and are pretty low angst easy reads. Both the MCs in The Geeky Jock Paradox were incredibly kind men. I would place them both in the cinnamon roll category. Hunter, however, was my favorite. I have such a soft spot for a geeky jock and I loved when he would geek out with Isaac, waving his hands wildly while he talked about subjects he was passionate about. I would smile away along with Isaac because honestly it was just adorable.

I had a hard time warming up to Isaac. He was timid and sweet. His innocent naivety made you want to snuggle him one moment, then smack him the next. He spent way too much of the book still hanging on to his high school crush Matt, who treated him terribly. For such a smart guy, Isaac was so blind to Matt and his excuses for waiting to be together once college was over. It drove me nuts! and Hunter! That sweet man could have blurted out all the manipulative BS Matt used with Isaac, but he didn't. Instead of using that information for his own gain, he kept quiet. Hunter never wanted to hurt Isaac and he knew if he said all those things it would. He decided to just enjoy Isaac while he could, and my heart just broke for him over it all. I needed Isaac to wake up and smell the coffee. He needed to see what was right in front of him all along if he just opened his eyes.

Thankfully, Isaac came through in the end. It was a close one. I worried we were going to have to go through some long, angsty separation. Luckily Isaac smarted up just in time. Although this one wasn't my favorite in the series, that would be Dallas and Kai's book, I still enjoyed it none the less. It was a good end to a sweet series, and I look forward what comes next from author Hayden Hall.