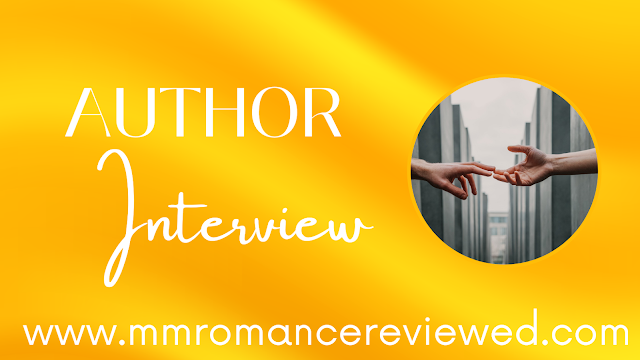 Today we chat with Maxime Jax, another amazing writer who I met in the Twitterverse..  I hope you're as excited as I am... let's get started!

Indie or Traditionally published? - Tell us how this works for you…

I’m self-published by choice. I have looked at both options, and the indie route is just what is right for me. I wanted to keep full creative control on my works and get my books to my readers as soon as they were ready. It is hard work, especially next to a full-time day job, but I wouldn’t have it any other way.

Plot or Pants? Do you pre-plot your books, use an outline, fly by the seat of your pants or some combination of things? How do you keep track of characters in a series? Do you keep a journal of your characters’ statistics, such as hair and eye color, relatives, hometown, etc.

I don’t plan at all. I’m a pure pantser. Usually, I only have the first scene of my WIP, and will start writing from there, just following my characters. I see the story like a movie in my head, hear the characters’ voices too, what they’re saying, feel what they’re feeling. It’s pretty powerful. But, if they stop acting, I need to put that project on hold until the characters act again. It can be months, or years… I don’t keep a journal but have small notes in my phone for scenes which just pop up in places where I can’t write. I re-read myself a lot, as I might not always remember what I wrote when I’ve written in the “zone”. When I was pantsing my Ancient Rome trilogy, I had to read the books often to etch the characters and events in my mind. As my characters sort of “live”, I don’t need to write down details about them, I see them as they are.

My first, and for now only, published book is a contemporary novel entitled “Fall”. It’s the love story between a rich, disaster med student, Jake, and a poor trapeze artist, Doug. It’s a heart-wrenching tale of self-discovery and finding love, a big book of love, and also my book of the heart, as this was the first one I finished (despite having started a few WIPs already) and published.

I don’t have a recently published novel, but I do have a few lined up for publishing in 2022. My Ancient Rome trilogy might be next, and I have a contemporary novel lined up, and a vampire fiction.

I write part-time, literally when I can squeeze it in between a full-time higher management job, a family to run, and my hobbies… Not an easy task.

I would serve my famous Gulyas soup, a traditional Hungarian dish which I can cook to perfection (I rarely boast, but this soup got high praises from guests :)) I’d invite my writing community friends, and picking 4 is a hard task…

Something people would be surprised to know about you.

I am a level 3 pole dancer.

Doug from “Fall”. He probably has the most of me too. And my Ancient Rome trilogy’s MCs have my heart too, but I do love all my characters. They are all different and lovable in their own way.

Where do you write? Do you have a routine?

No routine, just when inspiration hits, hopefully at a moment when I can write a bit, undisturbed. It is usually after work, or late at night, when I can have some peace and quiet. I write on my laptop, and usually sitting on the sofa.

What are your writing goals for the next year? The future?

I don’t set myself strict goals, because my job is very demanding, and takes a lot of energy. I have unpublished books sitting in my laptop for years now, so I am aiming at publishing those, and finishing my unfinished WIPs before another idea strikes… this is wishful thinking, at best. Possibly the only real goal I have is to keep writing.

It is a huge market, and as my works don’t really fit into the genre, it is hard work to find readers. I write in 3rd person omni, multiple POV which I switch at will, and in past tense too. I don’t write my stories to a market, I write out the stories from my heart, and that may deceive readers who might be used to something else in the genre. My characters act and I scribe, and hopefully, something original comes out of it. My works also spill into both genres, which makes it difficult to find them a proper category. It’s erotic romance, but then again, some of my works have less erotica in them than others.

I am a kind and caring person, despite being INTJ, so I usually come off to people as distant and arrogant. I love animals, especially horses. I love riding! I’m multilingual and have spent my entire carrier in education which I’m passionate about.

My books tend to be on the darker side, but there are some funny moments between my MCs, such as small banters, and replies, which will put a smile on your face. I wrote a scene in my Ancient Rome trilogy between Marius, my Roman general MC and his slave lover Kyle, when they discuss and role-play what Marius should be doing with his wife on their first night. There are some funny moments in that scene.

Nearing the end and not seeing it. As a pantser, the end might appear early, or not until the last moments. Thrilling, but you also have that small fear of not knowing when it’s going to end, and already being on Chapter 35.

My brother is the only one in my family who knows that I write and he has been there from the start to cheer me on, beta read “Fall” and do the book’s cover. Then, all my Writing Community friends on Twitter, too numerous to name, but I’ll name a few, still: Bjorn, Krystle, Susan, Gabriel, Boots, John, Rebecca, Kira, Aud, Chase, Dan, Em, Alistair, Luke , Connor, Jayme… Basically the whole community in Kira’s accountability thread too. The #WRITEboyslove community has been a huge support,, and especially Kon Blacke, who is my avid beta reader and the creator of my Ancient Rome trilogy’s covers. Then, the Cool LGBTQ Gang have also been amazing. And my readers… my readers who are waiting for my books. They keep me going.

What made you decide M/M romance was the genre you wanted to write? Do you write other genres?

The first scene of “Fall” has Jake running in a park. He trips and falls, and is helped up by a kind stranger who is a man. I wrote their story from there. Deep inside though, the fact that I’m genderfluid, and that I have a more masculine side since childhood, possibly also pushed me in the direction of writing M/M. I relate to men more than I relate to women, and my characters all happen to be guys falling in love. I have MM as the overarching genre, but my stories take place in various times and places, so I have works set in fantasy lands, as well as space, or Ancient Rome… I’m currently working on a crime MM erotic romance, so I dabble into other genres too, in a way.

As I said, the scenes just appear in my head, but I also get inspired by events and people in my life, by my love of Ancient Rome, my love of languages. The majority of my books also have animals and horses, as well as kids. I have my crime WIP that got inspired by a photo posted by another author Dan Fitzgerald on their insta feed.

I don’t combat it. If my characters stop acting, I stop writing. I will put that WIP aside and pick up another one, if those characters are willing to move, but sometimes, they won’t. Book 3 of my Ancient Rome trilogy stopped after Chapter 2 and I could only pick it back up more than a year later. That is why I don’t publish several books a year despite having a lot of first drafts done. They need editing and polishing, and that takes time.

No, my family doesn’t know that I write, only my brother knows. Sadly, I live in a country where being LGBTQ or writing LGBTQ is not viewed well. I can’t trust my family not to talk about me writing and this is a small country, and this information could get back to my job, which I could lose then. My family is also pretty conservative, I am not sure how they would take it. I am also not out to them as bi and genderfluid, as that would cause more trouble and grief. This goes for my friends too in real life, with some rare exceptions. I can’t risk them spreading the news. Some of my friends have ties to my employer, so it would be risky to tell them. I have online friends though cheering me on and a space where I can be safely myself.

Just writing down my gloriously messy human being characters’ lives, their adventures, their love, their vulnerability, their trials and tribulations, is already a great feeling. They are all glorious human messes.

Telling their stories, how passionately they love each other, just letting them show how deeply men can love, those are very humbling for an author to let out into the light.

Love is beautiful and writing about love is amazing. The motto I adopted is also “Love conquers all”. That is what I love writing the most.

You can find me on Twitter, that’s where I’m most active. I’m also on insta, Goodreads, Amazon, Youtube and Tiktok. All my links are here: Maxime Jaz | Linktree