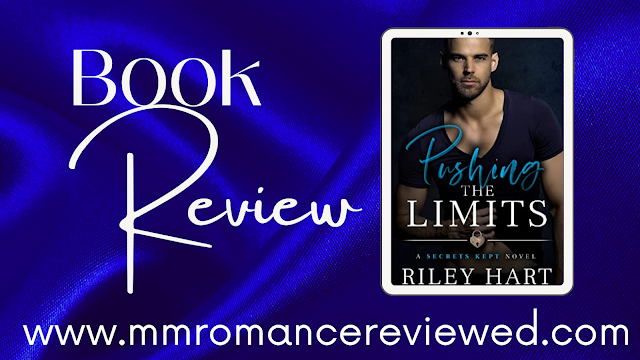 Jacqueleen, the Reading Queen says: I feel like it's been awhile since I've read a Riley Hart book. I'm not quite sure why that is because she is one of my favorite authors. In fact, her book Collide, was one of the first MM books I read and helped me fall in love with the genre. Pushing the Limits reminded me why I love her work so much.
From the blurb: 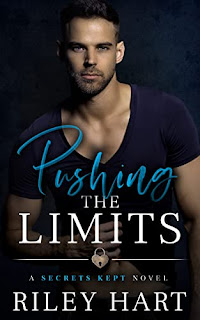 I was fourteen when my dad married Lane’s mom and our families became one, when my favorite moments were those spent staying up all night, talking or watching Lane create art.
There aren’t many things more inconvenient than loving your stepbrother. I know the limits, and that’s pushing them too far.
Over the years I’ve pulled away from him. It was easier when he left for New York, but now he’s back, not only in Atlanta, but in my home, trying to get back what we lost.
How can I tell my own stepbrother that I want him in my bed? That I want to call him mine?
One kiss changes everything.
Our tight-knit family won’t understand. Our friends won’t either. But no matter how much I don’t want to disappoint them, now that we’re where we belong, I won’t walk away. Even if I have to lose everything to keep him.
Pushing the Limits is a stepbrother romance with a cocky main character, who shows his vulnerability through the one man he’s not supposed to want, sexy painting, and a love that defies the odds.
Jacqueleen's Review:

The connection between Lane and Isaac was palpable. From the start of their parents moving them in together they just had this pull towards one another. Isaac figured it out right away. Unfortunately, Lane did not. He thought their bond had to do with family, with being stepbrothers. Knowing Lane didn't feel the same type of love as he did, Isaac ran. He went to California for college, while Lane headed to NY for his. Years went by and all the while Isaac tried to forget his love for Lane. Lane, who had no idea why the most important person in his life pushed him out of his...until a visit home changed everything.

I loved the moment the light bulb went off in Lane's head. All the beautiful moments of his and Isaacs lives flashing before him. The relief in finally knowing what had torn them apart. And then...the realization that he felt the same. It has always been Isaac for him. Isaac was his person, and Lane was his. No one knew Isaac like Lane and now no one else ever would. They just had to figure out how to tell not only the world, but their parents. I knew it wasn't going to be easy. Their parents adored them both. They thought of them both as sons. Finding out they were a couple was definitely going to throw them for a loop. I was so worried it was going to cause some big heartbreaking breakup, that after 14 years of waiting Isaac was going to lose Lane again after just having finally had him. I knew he'd be devastated.

Thankfully, the bond between Lane and Isaac was stronger than most. It helped that they had some cheerleaders along the way, including Hutch and Ryder from book 1. It was fun seeing them again and I just loved the friendship between Isaac and Hutch. Their sarcastic banter always had me smiling when they got together. Speaking of smiling, the epilogue 2 years down the road had me doing a lot of that too. The way Hart included Lane's passion for art into the book and the ending was really something I loved about Pushing the Limits and I highly recommend it.

My heart wept for Isaac, unrequited love, wanting someone he can't have - his straight stepbrother... I can't imagine living with the pain of knowing exactly who you want to be with and them being such a part of your life and oblivious...

Riley Hart tore me apart with the first part of this story... the build up is heart-wrenching in a way that only Riley can write... then the fireworks start... and well, it makes the tension worth it...there's still tension and angst to come, but... wow...

Pushing the Limits is ultimately not a taboo story, but the illusion and spectre of what family means and what is taboo permeates the book making the combination of slow burn and high heat a delicious combination.