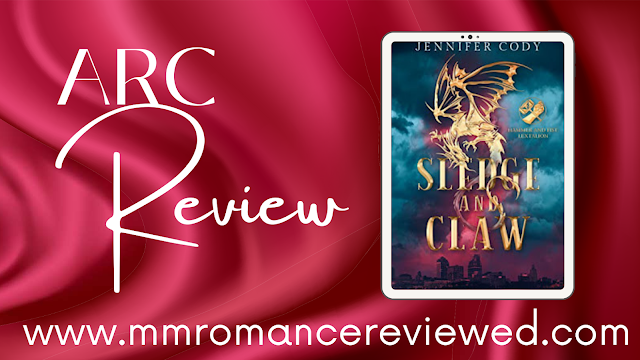 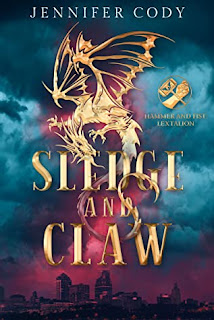 I work, I sleep, I fuck. That's what I do. My alphabet soup agency recruited me because of my unique blend of magic and innate talent, but those come with a steep price and it’s getting harder to pay with every investigation. I never thought Knoxville would be the place that kills me, but between someone targeting me to get me fired (or start a war; could go either way), taking on a naive new trainee, and investigating a non-human trafficking ring, it looks like I'm about to bite off more than I can chew. The question is, can I figure out what’s going on before it all blows up in my face?

Sledge and Claw is an MM Urban Fantasy with triggers for the horrors of slave trafficking, consent issues, and a cliffhanger.

There were so many aspects of this that I found fascinating. The magic, Lex and his abilities, just everything. There's a lot of world-building at the start but most of it is woven into a fast-paced storyline so it doesn't feel like an info dump. That being said, the second half does flow faster. Not a traditional romance but there is a character introduced that seems perfect for Lex and there are a couple of steamy scenes. 1 is with that partner and 1 at the start with someone else. The nature of Lex's curse and consent really gets the mind going and I'm really looking forward to book 2. There is a cliffhanger but I found it mild with the look at book 2. I read this through so quickly because I couldn't put it down and it goes into my re-read pile, no questions.

Rating: 5 Stars
Miki J's Review:
"Hit 'em hard ...... Put 'em down ...... For f****in' sure......"
What a rollickin’ adventure. Great start to new series, for sure !! Really good mix of urban fantasy and sci-fi.  I was totally enthralled by it…..hehehehehe…… Basically, we meet Lex who works for an organization that monitors and polices any incidents that involves non-humans and humans. He’s basically judge, jury & executioner….. and he has some issues with who he can work with and how. While there are steamy scenes, for the main part we follow Lex as he’s working his cases ….. but there is a hint of romance by the time you get to the end.
There’s plenty of suspense and action with some forceful information gathering and the eventual “cleaning house”. But to balance that, plenty of fun as well – selfiepocalypse !!! bahahahahaha
Can’t wait to read more books with these characters and in this world ! AWESOME !!
Rating: 5 Stars
5 Stars adventure ARC Cliffhanger Jacquie magic Miki J Paranormal steamy