His to Keep by Carrie Davis 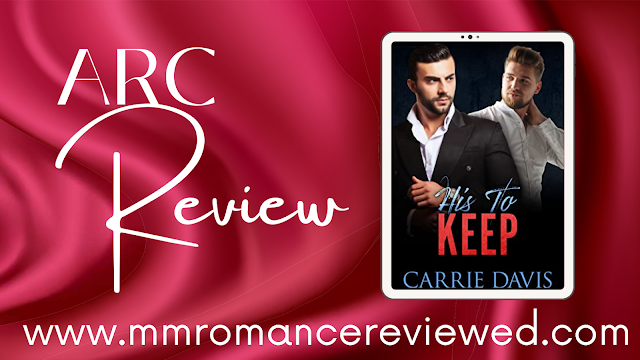 He was living proof a person could face a hell and not only survive, but flourish.
From the His To Keep blurb: 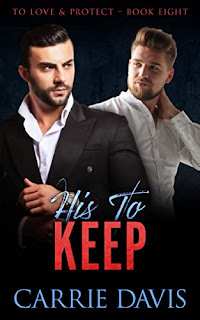 One man could change his world...
Slater Grady’s world forever changed when his sixteen-year-old sister was found murdered. Depression struck the family, leaving Slater vulnerable to years of neglect and serious abuse until he fled. Thirteen years later, his father is dead, his mother is struggling to reconnect with him, and his sister’s murder case is still unsolved.
Chase Jackson believes the original investigation of Brandi Grady’s death wasn’t properly handled. An investigative reporter, he sets out to find out the truth and put this horrible crime to rest, once and for all.
Chase and Slater find their mutual attraction turning into more as the two join forces to unravel the case, all while trying to survive incidents meant to deter them with potential lethal consequences.
Will Slater confide the dark details of his childhood? Can Chase overcome his own issues with the past?
Laora's Review:
Wow, wow, wow what a thrill ride with all the emotions involved for me as a reader.
I first want to warn for triggers.
I was crawling in my skin at the beginning of the book when Walter sees and takes his chance to anchor himself in lonely, sad young Slater his life. When he was at his most venerable when his sister, Brandi, was murdered and his parents could not cope.
I was happy to see that Slater and Chase (the MC's) where so good together in investigating and supporting one another to get to the culprits who murdered and embezzled the dead of Brandi, so many years ago. And in addition even tough they both have considerable trauma, in different ways they have come so far and support each other to heal further. They so fins their hea/hfn.
The 'baddies' were really bad in this book.
And lastly I appreciate that the author gives Slater his mother Renee 'normal' life after all her heartache, suffering, pain ans hard work.
Carrie Davis delivered another great volume in the To Love & Protect series and I am already looking forward to any other books in the series. The book however can be read as a stand alone."
5 Stars ARC Dark Laora mystery Series Standalone Trigger Warning