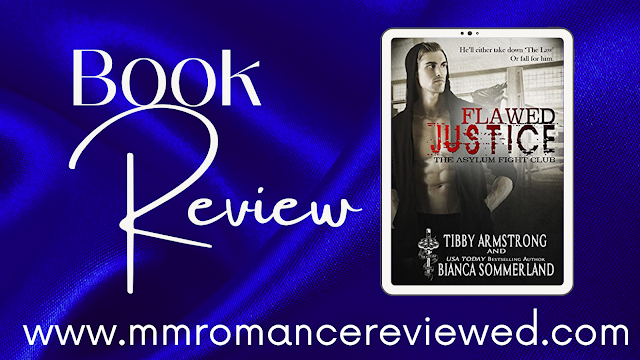 Flawed Justice was much more emotional than I was anticipating but I am totally here for it. Matt steps in to bail out his younger brother from trouble and agrees to take his place repaying damage to what he learns is a local fight club. Lawson is one of the founding members of the fight club and is fiercely protective of it - but this is a fight club with a difference!
From the blurb: 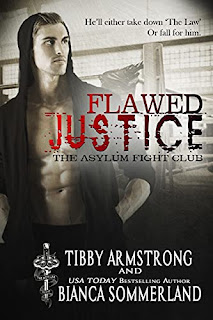 If there were an emergency number for adulthood, Matt Kincaid would have dialed it months ago. Raising his kid brother alone is already an uphill battle, nevermind when an ugly gang initiation lands the teen in lockup. Again. Only, this time for a hate crime against a local fight club, where settling debts isn’t taken lightly. When the club offers to let Matt risk everything in a long-shot match with a man who’s as brutally handsome as he is tough, he jumps at the chance.
If Matt wins, all will be forgiven. If not? Well, he might as well move in, because ‘The Law’ will own his ass...for a very long time.
There are no limits to what Lawson ‘The Law’ Gaumond will do to protect the club he and his former lovers built. An inner-city sanctuary where Anniston Falls’ gay leather culture thrives, The Asylum Fight Club isn’t an easy place, but it’s home. Taking on a local hothead whose younger brother vandalized the space isn’t high on his priority list, but there’s something about Matt that cries out for a firm hand.
Lawson’s never backed down from a fight, and he’s not about to start when there’s no way he can lose.
When renewed gang violence erupts, spilling blood over The Asylum, Lawson and Matt must confront their pasts to find a way forward. Gunshots and knives should be harder to survive than this rough love, but coming to the ring armed with nothing but the truth is their greatest challenge of all.

The hidden layers in this club where not what I was initially expecting however I really enjoyed it. I loved how the various members of the club all interacted with each other and protect each other.

There are some similarities with MC books however the format here is less rigid. I loved the way Matt and Lawson, whilst the main couple in this book, were not the sole focus and you got to learn a lot more about other people within the club as well. As Flawed Justice is the first in a series, I am looking forward to whatever comes next for the fight club.

Flawed Justice is available in ebook and paperback.