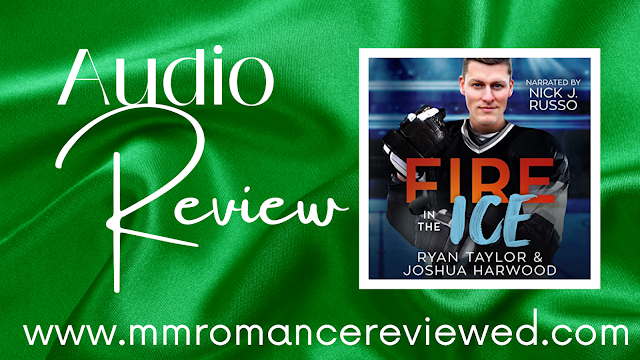 Fire in the Ice is an intriguing, entertaining, and diverting story from the pens of two very talented authors.
From the blurb: 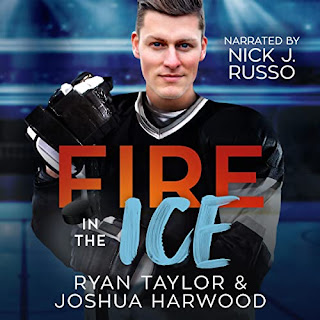 What if love threatened to destroy everything you’d worked for?

Hockey right winger Tyler Jensen isn’t thrilled to get the news he’s been traded to the Bethesda Barracudas. The team may be red-hot in the rankings, but there’s someone there he’d rather not have to see every day.

Defenseman Kevin Moore is one of the top-rated rookies in the country. He’s living the dream playing for the Barracudas—until he hears that his old high-school crush Tyler is joining the team. Ty was once everything Kev wanted, but their age difference got in the way. Tyler decided a three-year gap was too much and left Kevin behind.

In Bethesda, Tyler doesn’t take long to notice that Kevin has grown up into precisely the kind of man he can’t resist—brawny, brainy, and beautiful. Kev feels the pull too, and as the men become closer, they work hard to keep their budding relationship secret. Professional hockey may be welcoming gay players now, but Ty and Kev aren’t sure management would like the idea of two Barracudas taking teamwork to an entirely new level.

As the playoffs loom, news of their romance gets out. Ty and Kev, caught in a storm of controversy that threatens to destroy them, need a power play to save their careers. How will they find one before it’s too late?

Fire in the Ice delivers on the promise that second chances can work and dreams can come true. If you like exciting hockey, plenty of humor, a beautiful HEA, new adults, young athletes, and enough heat to burn down the house, this book is for you.

Fire in the Ice was as good as I hoped it would be, the authors took me on a whirlwind set in the wonderful world of a fictional NHL league with out and proud players. Kevin & Tyler have known each ,other since prep school, and find themselves as players on the same very progressive team. I loved all the story building, attention to detail and the love for the characters that shines through the whole book. I enjoyed 'meeting up' with Nick & Jacob and other characters from the previous books and being introduced to new ones. The narration by Nick J. Russo was well done, he made it a lively read. I am always surprised by the fact how little details in the written book can grab my attention in the audiobook. I highly recommend this audiobook if you love hockey, heat, sweet guys, who find their hea and a lovely voice to listen to.
Rating: 5* overall, 5* book, 5* narration
Lesetiger's Review:
After recently listening to the audiobook ""Nice Catching You"" by these two authors and being completely enthralled, I was very happy to hear that another audiobook by Ryan Taylor and Joshua Harwood has been released.
I love their writing style because it is heartwarming. The story hooked me from the beginning, it's emotionally written, has ups and downs and great characters. It's not hard to fall in love with Kevin and Tyler. They were drawn very vividly, so as a listener I really enjoyed following them on their journey. Of course, Nick J. Russo, who brilliantly voiced Kevin and Tyler's story, also contributed to this. I absolutely loved the game in the stadium when the Barracudas were playing for a spot in the PlayOffs. It was almost as if you were there yourself. Magnificent.
Kevin and Tyler have known each other for a long time, their paths have crossed every now and then and then lost each other again. Now they play on the same hockey team and you can feel the attraction and the sparks that fly between them. Kevin and Tyler are very likeable and captured my heart in an instant. But how do the two of them handle it when the press suddenly makes a huge fuss about their relationship? Tyler and Kevin have to deal with difficulties that were portrayed very realistically, there is some drama but there is also a lot of support.
I was very happy to meet again some characters from the previous book. However, you can read ""Fire in the Ice"" independently and as a standalone. But for me, it added to the fun of reading that I already knew the backstories of the secondary characters. This book is another intriguing, entertaining, and diverting story from the pens of two very talented authors.
Nick J. Russo did a terrific job of capturing the characters. I love the way he brought the story to life. He is very good at portraying the emotions of the protagonists and he has a pleasant voice that pulled me along as a listener. As always, it was a pleasure to listen to Nick J. Russo with his great, talented voice and pleasant storytelling pace.
Highly recommended!
Rating: 5 Stars overall - 5 stars performance - 5 stars story
Fire in the Ice is currently available in audiobook and e-book  and can be read as part of your Kindle Unlimited Subscription

We're a stop on the audiobook tour!  Check out our tour post and enter the giveaway before March 31st! Just click on the graphic below: 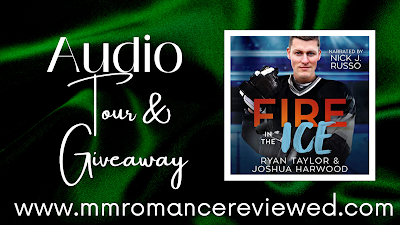