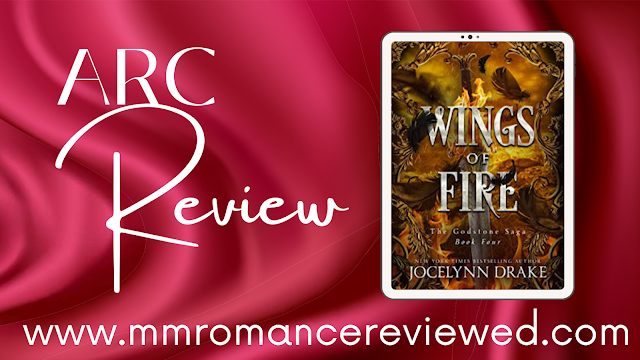 The Godstone Saga fantasy adventure series continues with action, loyalty, love and dragons! Wings of Fire is an epic story with wonderful characters where the danger and romance are equally written for tension and swoon. 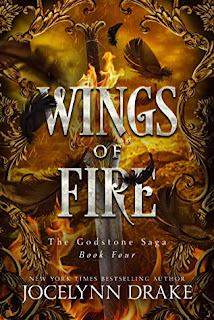 The Goddess of Fire calls from the Isle of Stone, and Caelan must obey.But the new king must first unravel a lifetime of secrets if he wants to have any chance of saving Drayce’s life.

Caelan and his companions battle dragon clans and cranky gods in their quest to protect their world from the Goddess of the Hunt.

And if they’re lucky, they might even get a little help from an unexpected source.

Wings of Fire is the fourth book in the six-book Godstone Saga fantasy series and is not a standalone. The story contains danger, secrets, bossy gods, stolen kisses, a new king finding his way, a possessive boyfriend, magic, and lots of delicious angst.

Fourth in series (Godstone Saga), must be read in order as this is a continuing storyline. Fantasy adventure. Multiple POV’s.
Picking up a few months after book three (Wake the Dead) and their escape from Zastrad, Caelan is dealing with another god in his head and making plans to not only bond with another god, but hopefully find his wayward boyfriend and return him back to their questing family. More adventure, action, angst, and the introduction of another great set of secondary characters made this book race along and grab you by the throat with tension and emotional scenes that had me tearing up constantly. I really love the entire main group of friends/family, who are all loyal, admirable and willing to do anything for each other. Really happy to have a story where the couples' relationships continue to grow and strengthen the overall story, the romance equal to the mission to save Thia. Pleasantly surprised that each book in this series is just as compelling as the last and this storyline continues to capture my interest. Still highly recommending this series.

Rating 5 Stars
Miki J's Review:
Freakin' awesome series !!
OMG !!! This series just gets better and better. There’s sooo much going on with emotional ups’n’downs and plot twists with more twists, you’ll end up with neck strain from all of the WTF moments!
Obviously, the story picks up from where the last book ended – on the road again…… Our guys go through some very very rough patches…. and just when you think our guys are solid again, somethings (yes, more than one !) happen – it will grab you by the heart, stomp on it a few times and be put back with care – have tissues handy. There are light-hearted moments and we get to meet new characters – love the cousin !! And Adrian…can’t wait to see more with them….
Overall, Wings of Fire is a wonderfully freakin’ brilliant book !
There are a couple of chapters with trigger warnings - attempted suicide
Rating: 5 Stars
Wings of Fire  is currently available in e-book and paperback and can be read as part of your Kindle Unlimited Subscription