#ThrowbackThursday: What Lies Beneath by RJ Scott #TBT 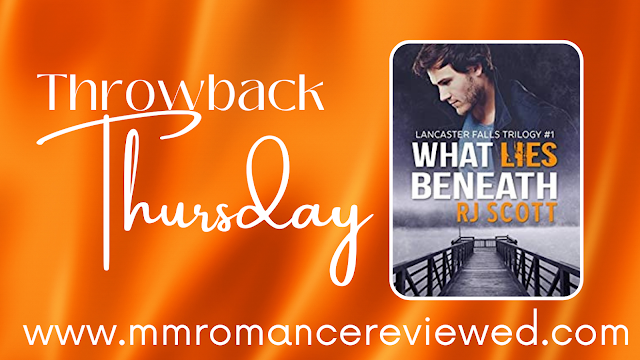 The temperature outside is dropping and we're expecting another 10-20 cm of snow here in Toronto, so when I looked at my TBT list, the one that stood out was What Lies Beneath by RJ Scott because the blurb automatically transported me to a hotter place, if not a more suspenseful place...
From the blurb: 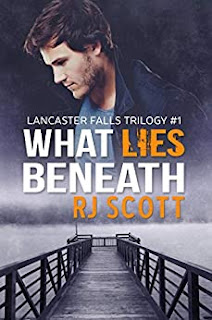 In the hottest summer on record, Iron Lake reservoir is emptying, revealing secrets that were intended to stay hidden beneath the water. The tragic story of a missing man is a media sensation, and abruptly the writer and the cop falling in love is just a postscript to horrors neither could have imagined.

Best Selling Horror writer Chris Lassiter struggles for inspiration and he’s close to never writing again. His life has become an endless loop of nothing but empty pages, personal appearances, and a marketing machine that is systematically destroying his muse. In a desperate attempt to force Chris to complete unfinished manuscripts his agent buys a remote cabin. All Chris has to do is hide away and write, but he’s lost his muse, and not even he can make stories appear from thin air.

Sawyer Wiseman left town for Chicago, chasing the excitement and potential of being a big city cop, rising the ranks, and making his mark. A case gone horribly wrong draws him back to Lancaster Falls. Working for the tiny police department in the town he’d been running from, digging into cold cases and police corruption, he spends his day's healing, and his nights hoping the nightmares of his last case leave him alone.
Exclusive Excerpt:
I loved running, but there was a reason we were going now this early in the morning. Not even I was stupid enough to go out when the temperature was as high as it had been yesterday. Of course, I headed directly to the reservoir, or as my sexy cop had called it, Iron Lake. I wondered if that was its official name. I'd looked at photos of the rail tracks that ended on the new shore, at the vast iron and concrete bridge that crossed over it, and the jetties—metal and wood—that jutted out into the water. Maybe those things had influenced the name. Or could it be that the lake was usually the iron gray of a fall day?

Not that there was a lot of water in the lake right now. Drought in this area was extensive, and the lake levels had dropped from what I’d seen in photos online. There was an eeriness to the exposed landscape, cracked mud and the definite foundations of the old tracks, and the prick of an idea began to form. It wasn't a full blown idea, but it was more than I'd had for a long time.

Kota spotted the other runner before I did as we headed up to the main bridge. He loped faster, ahead of me, and I knew this wasn’t going to end well. The runner tried to avoid Kota. Kota, on the other hand, thought a game of chicken with the woman in Lycra was a fine idea, and the inevitable crash was all on Kota.

Kota jumped like a mad thing around her, causing her to stumble to her knees. I crouched to help her, with apologies falling from my lips about my stupid-ass dog, but she wasn’t listening to me. She looked terrified, and let out a choked noise of horror, pointing down at the lakebed.

Right to the skull buried in the mud.

Beneath the rotting bridge, stark white bones were exposed in the cracked sludge, empty sockets pointing skyward. Instinctively, I attempted to help the woman stand at the same time as I dragged Kota away from where he was tugging to go and dig in the dirt, getting tangled in both and ending up on my ass for my sins. I clipped the leash on Kota to stop him from dancing around, and he enthusiastically jumped up at me, but I made him sit; I needed to see this.


"Jesus God in Heaven." The woman stumbled backward, signing a cross over her running top. "Oh my God, oh my God." Her voice cracked, her breathing harsh, and she fell slowly against the handrail. "It’s a … we found a….”

I should’ve reacted the same, staggering backward with a horrified gasp, calling on some god or something to help me like any normal person, but all I could do was shuffle closer and stare. Reacting in the extremes, shock, horror, nausea, that was what regular people did when they found skeletal remains on the course of their morning run. Not me; I was hypnotized by the remnants forced into view by the drought-dry earth because it was the curse of my writer’s brain to imagine death and the stories around human remains. I could imagine the demise of this person in morbid detail.

The parts I could see of the skull were clinically clean, free of flesh, possibly flushed by the water that had once hidden it or the passage of time as it had sat there. It was too sterile.
When I wrote about skulls, I detailed the evil magic slithering out of the orbital or described the bone as scorched and twisted by fire. Hell, in my stories, there would still be flesh attached. None of the carefully planned heroes in my books discovered pristine remains.

Someone should call emergency services, and I might have said that out loud because I was vaguely aware my fellow runner was using her cell to call 911. The image of the cop from earlier came to mind, sexy Sawyer with his brown eyes and his dark red hair, coming down to investigate...

What Lies Beneath by RJ Scott is available as an e-book, paperback, audiobook and even an AudioCD and is the first book in the Lancaster Falls trilogy.