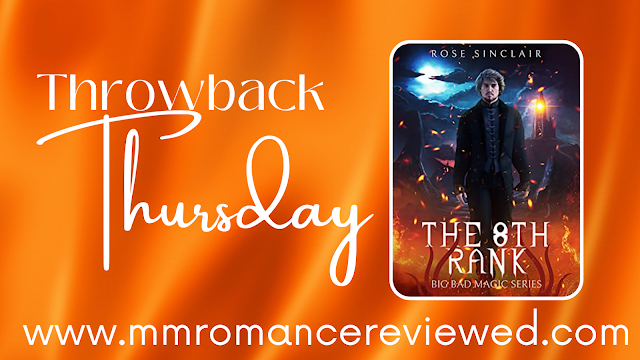 A few weeks ago, we were lucky enough to be able to interview Rose Sinclair and got just a tiny teaser about The 8th Rank - her first book to feature M/M Romance... so now we have a chance to learn a little more with this exclusive excerpt! 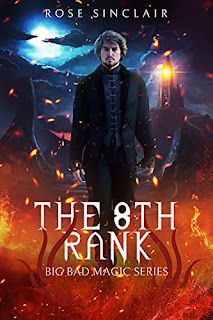 An enchanted wolf familiar. A noble rebel. And a magic-fueled race to stop the murder of a queen.
Haunted by his missing memories, Mal wants answers. This Big Bad Wolf only knows he’s been wrongfully made a villain. When a magic mirror shows Robin Hood is searching for him, Mal hopes this man might be his long-lost home.
Mal must stitch together the pieces of his reclaimed past to find out who Robin was to him. All signs point to Robin being his childhood friend, but Mal is interested in being more than just friends now. Thankfully, Mal’s magical talents make him a valuable resource for any cause. And he’s willing to dedicate himself to one man: Robin Hood.
Reunited in a hidden forest, Mal learns his desires to get closer aren’t so unrequited after all. With the kingdom overrun with chaos, it puts Mal and Robin’s relationship to the test. Can they overcome the obstacles in their path to find their happily ever after?
Get ready for fairytales to collide The Eighth Rank is the first in the spellbinding Big Bad Magic series. This fantasy novel features a cursed hero in search of redemption in a friends to lovers romance, ending with a happily ever after.
Exclusive Excerpt:
Now Myrddin shared a knowing look with me. But what I was meant to know was beyond me. “Do you believe in magic?”
I didn't want to be the first to answer, but Jonathan seemed to be avoiding the question, and Sophie too distracted by all of his cluttered house of thingmabobs. ""I don't know what to believe.”
“And the rest of you?”
I could feel Jonathan's weary look, almost hear his suspicion even without a word. “I do!” Sophie raised her hand into the air like she was in class.
“This calls for a test.” Myrddin declared and wandered off to the other end of the room. With some digging, he turned back to us with a doll in his hands. ""Here we go."" He held a palm open and flat, and when he moved his other hand away the doll floated.
More than that. It started to twirl. He quickly closed his hand, ending it all. “Now you.”
“Me?” I struggled to spit out another word as he pressed the doll to my hand. “I don’t want this. Aren’t you meant to explain the trick beforehand?”
“If it had been a trick.”
I tried to set the toy on her feet, but without my other hand propping it up even that was a fight. An owl cooed loudly outside drawing Sophie’s attention. Both of us ours really. Only Jonathan was focusing on what we've been shown. Me and the doll. My grip tightened into a fist, crushing the dress as I grew more annoyed.
“I don’t play with dolls.”
“You need to believe in it. Back when you believed anything in the world was possible.”
“Fine,” I growled. Closing my eyes and focusing everything in me on the weight in my hand. Imagining what it would look like floating here instead of with the old mage. Then I pictured being able to see the air swirling around the doll.
“Wonderful!” Myrddin exclaimed. The distraction caused the doll to fall back into my hand before I even opened my eyes to see it work. “Few can make it go on the first try. Magic must have already carved its way through you.”
I doubted I had actually done anything. But the ends of the doll’s dress seemed singed up close. Had it always been like that? I tossed the toy down on the nearest surface. “This isn't what we are here for. Can you help me decipher a memory?”
The 8th Rank is available in paperback and e-book formats and is also available to download and read as part of your Kindle Unlimited subscription!
#TBT #ThrowbackThursday