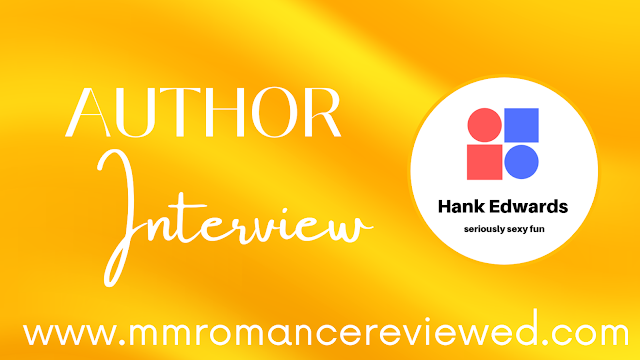 Before I get into today's interview, I'd love to share a fun fact with y'all... Star-Spangled Showdown was one of the first reviews I published to the blog! I was increasingly frustrated with how long 'Zon was taking to publish my reviews and wanted an outlet other than Goodreads as a place to share... so along with five other reviews I'd written in the week before, Star-Spangled Showdown was part of the blog from the very first day and one of my first 5 Star Reviews!  It's one of the many reasons I'm so excited to be interviewing Hank Edwards today!  I hope you enjoy learning about him and his work as much as I have:
Indie or Traditionally published? - Tell us how this works for you…

I am a mix. I write in Scrivener and set up each chapter as its own folder and make notecards for the chapter. The characters will often stray wildly from those notes as I write, and I’ve learned to just go with it.

My first published novel over twenty years ago was a humorous gay erotica book called “Fluffers, Inc.” Lots of filthy sex, and lots of funny action, with a blush of romance.

My first true MM Romance book was Holed Up, the first book in my Up to Trouble series. It’s an FBI Agent/Civilian suspense mystery series with a mystery/villain that runs over the entire four book series.

My most recent book was released last summer (I know!) and is the fourth book in the Williamsville Inn shared universe series I write alongside Brigham Vaughn. The book is titled “Star-Spangled Showdown” and it’s set around the US Independence Day holiday at the fictional Williamsville Inn in upstate New York. It’s a corporate rivals to lovers story set in the world of fireworks management companies.

I did write another story last year that is an off-shoot of my Critter Catchers humorous paranormal best friends to lovers out for you series. This story is titled “The Mystery of the Morelock Motel,” and is told from the POVs of Oliver Berridge and Dave Bower, important and popular secondary characters of the original Critter Catchers series. It’s available through the year-long Prolific Works giveaway titled Your Book Boyfriend’s Boyfriend.

Part time. I have a full time day job.

Josh Stanton from Venom Valley my mm romance horror series set in the American Old West featuring evil vampires, zombies, and Native American spirits. I really had a great time writing this trilogy and bringing some new twists to the vampire and zombie genre.

I wish I could set a routine, but I grab time where I can. I usually write on my desktop iMac in my home office.

I want to publish at least three books this year, but that will take a lot of focus, and I have multiple responsibilities outside of writing to manage as well. I’m currently writing the first book of a second “season” of my Critter Catchers series and hope to get three of those books published this year.

What else do you want us to know about  you?

I love attending the Gay Rom Lit (GRL) conference every year to meet other MM Romance authors and readers. If you’ve never been, check it out online and see if you’re able to go. It’s a great feeling to spend a long weekend with your “tribe” of people who love to read the same genre.

It’s got to be a scene in Fluffers, Inc. Charlie is a fluffer for hire who’s a little too good at his job (he gets the men to finish instead of just keeping them up) and very clumsy. There’s a scene in the first book with a man in a sling, a man with a latex glove servicing him, and Charlie gets an up close look at it all in a terrible way. Gross and funny.

Making the time to do it.

A group of authors I’ve come to think of as friends, as well as many readers I’ve befriended over the years.

I wanted to see gay romance represented in fiction. I do write more mainstream mysteries, and under the pen name R. G. Thomas I’ve written a young adult urban fantasy gay romance series called The Town of Superstition with a sweet gay romance at the core.

How can we connect with you? Find me online at the following places: