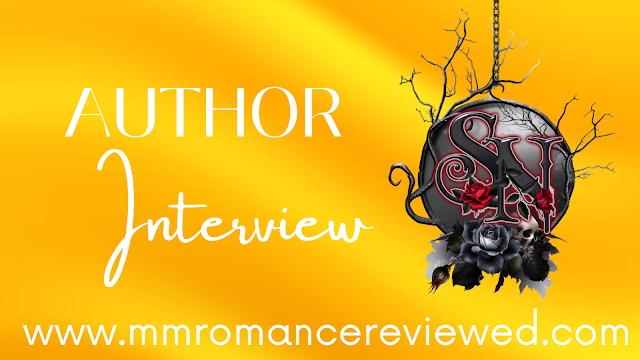 Today we feature a writing duo for the first time in our Author Interview segment - C.J. Twining and Rien Nadie!  Another thing that makes this interview fun is that they are currently publishing on Kindle Vella.
Indie or Traditionally published?

Indie, mostly.  We’re publishing two web serials on Kindle Vella ourselves and will be self publishing those as e-books through Amazon.   Even if we get a publisher rather than self publish some of our books, it’ll be with a small press where we maintain more control over our books.

Honestly, we mostly keep it in our heads.  We have a few places to keep notes, mostly in Discord.  We have started committing some of it in articles for our World Anvil, but we’re pretty bad about keeping up on that part!

As for plots, we really start with characters and a ‘what if’ scenario.  Then we go from there and just talk through the storyline and plot points as we go and as we see what makes sense in our world.

Mortal Consequences is our first published story.  It’s about halfway released at this point with the first arc of the story.  It was honestly something we just started writing on a whim- two bad men doing bad things unrepentantly.  It fronts a trans man witch and his hellhound stalker, getting revenge on his ex.  It’s not the first thing we’ve ever written either separately or together, but we decided to publish it first because it feels pointedly unmarketable for most publishers.  It’s a LOT of sex, a lot of violence, a lot of violent sex, and a lot of really questionable dynamics and decision making.  We didn’t want to temper it, so we thought what the hell.  Edited it and started releasing it.  At this point we still thought we might go mostly with traditional publishing for the majority of our books.  Our opinion has changed a lot in the last six months!

We just started releasing Wrought of Gold in January and it’s an entirely different speed from Mortal Consequences.  It’s about a Fae doctor whose human life is slipping out of his grasp, a Faery-made construct who has lost everything that ever gave him purpose.  It’s about grief and loss and bitterness and choosing kindness over hatred, not letting people turn you into a person you don’t want to be.  It’s a very slow burn sort of romance.

In the end, it’s really about choice, and love.
Do you write full time or part-time?

It’s complicated!  We write sort of full time.  We both treat it as a job.  However, Rien also runs a handmade fetish gear business and C.J. has young children.  So we have to keep our work flexible.

ALL OF THEM.
Because we write all our stories in the same world, they’re all always coming back to us.  However, we joke that Noah and Relic are sort of the ‘main characters’ of the world even though they only cameo in Mortal Consequences and Wrought of Gold.  They started it, and their thread runs through everything.

In the morning we tend to do our separate things, graphics work and such for C.J. and other business stuff for Rien.  We also do admin work then, like social media, scheduling chapters, etc.  In the afternoon we write.  We also set aside one or two evenings during the week to focus on work, though we both separately pick at things whenever we have time.  We’re sort of workaholics.

So at the beginning of this year we made a rough outline for the next like 3-5 years, haha.  Our current goal for this year is 2 web serials and 2-3 books.  Maybe more.  That’s about the production schedule we’re hoping to maintain into the future.

Editing.
In all seriousness, it’s mostly outside forces.  M/M romance or erotica not being respected outside the genre, being considered hyper-niche.  Like straight romance is just expected to appeal to everyone, what makes M/M that different?
The actual task of writing itself isn’t hard for us.

Ok, so we don’t write comedy but things are sometimes hilarious.  So in this draft we’re currently working on (it’s a sequel), the main couple are making out in the kitchen and one of their friends is over.  He’s just woken up and made them move to get coffee and is going to the fire escape to smoke and one of the MCs breaks off the hot and heavy make out to yell at him to put on pants because he was only wearing a tiny pair of briefs.
I don’t think it sounds as funny here as it does in the context of the book, but it made us laugh.

Writing isn’t hard.  Editing is.  The act of creation is incredible and wonderful and we just don’t find it particularly difficult.  It helps that we have each other to lean on to get through plot snarls and such.

So we don’t exclusively or specifically write m/m.  We write queer stories.  Our world defaults to queer relationships because that’s how we live.  Even the ‘straight’ couples in our stories are often bi or queer in some way.  It just so happens that a lot of our stuff is m/m.  We do have some sapphic stories and bi stories and poly stories all written, it’s just not their time yet!

Everywhere.  In each other, in the world we’ve created, in the characters and their traumas, in art, in people watching, in other writers.  Just everywhere.

We write something else.  If something is stalling us, we just switch to a different story until we break through it.

So we’re both open about what we write.  We’re passionate about it.  People have varying opinions, but we don’t really care about other peoples’ opinions?  This is just what we do.

Everything, lol.  What we love most is probably the details and complications of relationship dynamics.  Seeing how the characters really blossom into ‘real’ people and interact with each other.

How can we connect with you?
You can follow us on Twitter and Instagram @shadowsnocturne
Our website goes straight to our World Anvil where you can read about the lore of the world (what we’ve gotten to so far) shadowsnocturne.com
And of course, our stories are on Kindle Vella!
Author Interview