I finished my ARC of Egotistical Puckboy last night and, spoiler alert, it's as good as anything that Eden Finley and Saxon James have written before... my review will go up on Thursday when the book releases, but for now, they've agreed to share another small teaser with you! 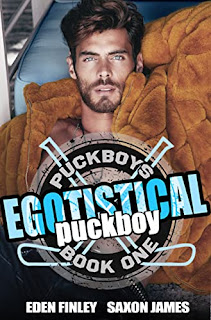 EZRA
Partying, dudes, and hockey. What more could a gay NHL player want?
If it weren't for Anton Hayes, my life would be perfect.
Not that he affects my life in any way. At all. That would imply I care what the winger from Philly thinks of me.
Which I don't.
Not even a one-night stand with him can thaw his misplaced animosity toward me.
He says I'm the one with the ego, but he can talk. He rivals me for most egotistical puck boy in the league.
I hate him as much as he hates me. Even if I crave a repeat.
ANTON
When it comes to hockey, I'm all about the game.
I've worked for years to be one of the best in the league, and l've done it without splashing my orientation all over the tabloids.
My hockey image is one I've carefully cultivated, and after one night with Ezra Palaszczuk, I risk it all.
He's cocky, obnoxious, and has an ego bigger than Massachusetts. And okay, maybe he's the sexiest man I've ever known.
We'll never get along. Not when we sleep together. Not even when my possessive streak awakens.
That doesn't stop us from falling into bed together over and over again.

This excerpt continues after the exchange that was posted in the Cover Reveal last month and is told from Anton's POV:

I consider myself to be a levelheaded guy. I’m a fair player, I work my heart out, I’d do anything for my family …but there’s something about Ezra Palaszczuk that digs under my skin and sets all rational thought on fire.

That confrontation could have been so much worse than it was. If it had turned into a fight, you can bet it would have been hot news by morning. Like I told Ezra, my focus is hockey, and that’s all I want to be known for.

But I stepped in to help him without a thought.

Ezra sways, looking from one side of the street to the other. Those piercing blue eyes are heavy-lidded and unfocused. “Which way was I going?”

“Because I need to get my gay on.” He stumbles a few steps, changes his mind, and then swings in the other direction. Only he overshoots and somehow ends up walking into me.

How the hell is this guy one of the kings of hockey?

I help right him, but he presses harder against me.

“I’m going to remind you of those words every chance I get.” I pry him off me. “You’re a mess. In what world would I be interested in someone who smells like a brewery and has the coordination of a two-year-old?”

“Of course. You’re perfect Anton Hayes, you have standards, and playoffs, and a hockey stick rammed right up your—”

“You know, I have no idea why those men wanted to hit you.”

“Was that English or Polish?”

This is what I get for interfering. An Ezra so far past drunk that even my conscience won’t let me leave him here.

Sighing, I grab his arm and yank him toward the road just in time to flag down a taxi.

“Always, but not with you.” I shove him in the back of the cab as soon as the door is open. “And your beard looks ridiculous, by the way.”

He drops his head back and closes his eyes. “You’re such a fuckface.”

“And you have two left skates. Goddamn pigeon.”

“The hat trick I got tonight says otherwise,”I say. “What score did Boston end up on again?”

“That’s what I thought.” I give the driver my address, and he pulls into traffic. “You play the role of a petulant child so well.”

“And you play the peten-pretentious asshole. That’s you.” He hiccups. “Take me to the hotel.”

“I’m not going anywhere near your team. I have a spare room. You can sleep off the alcohol and leave in the morning.”

Egotistical Puckboy is currently available for pre-order and will release on Kindle and KU on Thursday, February 10th!