Season's Change by Cait Nary 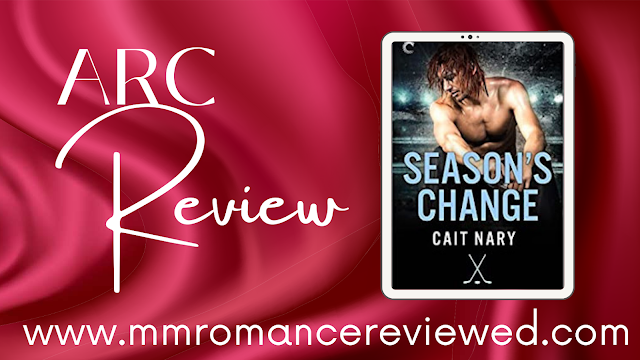 Season's Change was a departure from what I call a typical MM Hockey/Sports Romance:
From the blurb: 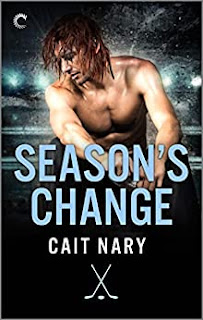 A veteran hockey player and a rookie can't get away from each other—or their own desires—in this sexy, heartfelt opposites-attract hockey romance.
Olly Järvinen has a long way to go. He’s got a fresh start playing for a new team, but getting his hockey career back on track is going to take more than a change of scenery. He’s got to shut his past out and focus. On the game, not on his rookie roommate and his annoyingly sunny disposition—and annoyingly distracting good looks.
All Benji Bryzinski ever wanted was to play in the big leagues, and he’s not going to waste one single second of his rookie season. Yoga, kale smoothies and guided meditation help keep his head in the game. But his roommate keeps knocking him off track. Maybe it’s just that Olly is a grumpy bastard. Or maybe it’s something else, something Benji doesn’t have a name for yet.
Olly and Benji spend all their time together—on the ice, in the locker room, in their apartment—and ignoring their unspoken feelings isn’t making them go away. Acting on attraction is one thing, but turning a season’s fling into forever would mean facing the past—and redefining the future.
TW: Season’s Change includes depictions of anxiety, depression, panic attacks, homophobia, internalized homophobia and the use of slurs.
Heather's Review:
Season's Change is an incredibly slow burn, New Adult sports romance.  It's heavy on character and world building but really doesn't structure itself as a typical romance.  It definitely lays the groundwork of teammates and roommates to friends to lovers in a very slow pattern that won't be everyone's cup of tea.  It features a lot of hockey and team building and also introspection and personal growth for Olly in particular and a very sweet build to the romance.
I enjoyed getting to know the boys, both the MC's and their friends on the team and as long as you know going in that this story is a long game and you truly enjoy a slow and not so steady build to the end, you will smile when you reach your destination.
The prose is well written and I could honestly see marketing this as a New Adult romance.  I was a little thrown because of what I typically expect from a Carina Press book, but even though it's not what I expected, it was a good and enjoyable read.
4 Stars
4 Stars hockey New Adult slow burn sports Trigger Warning