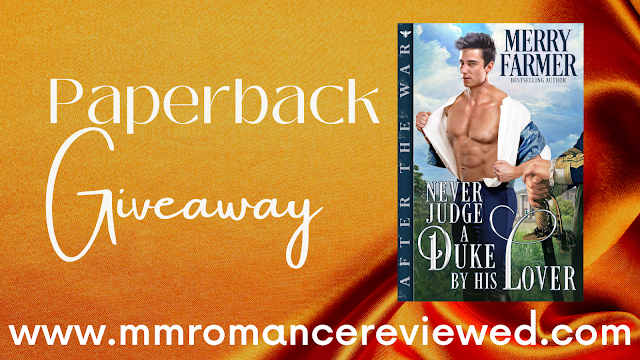 Merry Farmer is generously giving away TWO Paperback copies of Never Judge A Duke By His Lover - Book Two in After the War.  This giveaway is open internationally and as a bonus, read all the way to the bottom of this post to get a FREE e-book copy of book 1 in the series!
The Blurb:
Never Judge a Duke by His Lover - link - books2read.com/u/b5oqWA
Lord Barrett Landers, Viscount Copeland, is at loose ends after being decommissioned as a naval officer at the end of the Napoleonic Wars. Instead of going home to Wiltshire, his family, and the marriage that his mother will inevitably attempt to force him into, he is happy to idle away the summer with his friends at Wodehouse Abbey in Yorkshire.
And then temptation arrives in the form of the estate’s owner, Lord Anthony Wodehouse, Duke of Malton.
Widower Anthony wants nothing more than to live his life in the country, as far away from London and his duties as a peer as he can get. He has children to raise, an estate to manage, and a family’s expectations to uphold. He thought that hosting his youngest brother’s friends for the summer would be nothing more than a minor inconvenience and a chance to expand his tiny circle of acquaintances.
Until handsome and charming Barrett stirs feelings in him that he never thought he could have.
Anthony and Barrett embark on an eye-opening love affair that makes both of them reconsider their ideas about duty and family. But when Anthony’s meddlesome aunt arrives with far more traditional plans for her nephew, and when she invites a passel of marriage-minded guests to stay with Anthony without asking him, the resulting shenanigans could land both Anthony and Barrett in heaps of trouble as they decide whether to follow their hearts or their families’ wishes.
PLEASE BE ADVISED: Steam Level - Smokin' hot! This includes explicit scenes between male lovers, so if that isn't what you want to read, please feel free to pass on this book.
Excerpt: 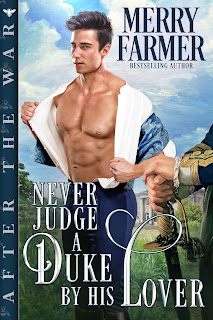 Never Judge a Duke by His Lover - link - books2read.com/u/b5oqWA
“Perhaps you’d better count to thirty or higher to give those of us who are not used to such games a chance to truly hide,” he told Eliza with a wink.
Eliza laughed. “Oh, Papa. You aren’t very good at games, are you?”
For some reason, that comment had him glancing in Barrett’s direction. His heart seemed to miss a beat for no reason when he found Barrett grinning at him, as though he agreed with Eliza.
“There isn’t much call to play hide-and-seek in Westminster,” he answered. “Though if there were, I can assure you that I would know all the best hiding places in the House of Lords’ chambers.”
That comment earned him a laugh from Barrett—and Red, Bolton, and Seymour, though he hardly noticed them—which left Anthony feeling as though he might actually be up to the game after all. Society had never been his forte—which likely explained why he was so uncomfortable playing host to Red’s friends—but at that moment, he felt as though he were up to the task of host for a few.
“Whenever you are ready, my love,” he told Eliza.
“I am ready,” Eliza declared resolutely. She marched to a spot in the center of the large room, covered her eyes with her hands, and began counting, “One, two, three…”
There was something delightfully ridiculous about five grown men scattering around a conservatory as a ten-year-old girl counted. Francis leapt straight for the closet, as Anthony had predicted. Bolton took up a position behind the piano, which was utterly inadequate to hide his large frame. Seymour, who was much lither, dashed for a spot behind one of the sofas that stood near the wall.
Anthony didn’t see where the others went. He was too busy bolting for one of the curtains framing the French doors that led out to the terrace. He chose the one at the far end of the room and quickly concealed himself behind it, but he wasn’t alone.
Barrett dove behind the same curtain from the other side. The result was that the two of them ended up nearly knocking each other over with the haste of their movements. Anthony reached for Barrett to stop himself from spilling to the floor. Barrett had the same idea. Within a heartbeat, the two of them stood tangled up together behind the curtain, trying their very best to stand perfectly still so that they did not give away their position.
“…twenty-nine, thirty!” Eliza declared. “I’m going to find you all.”
Anthony held his breath as his head spun. There was no need to lean closer to Barrett to inhale his scent, that scent was all around him, infusing him and making him lightheaded. One of his arms was clamped around Barrett’s side, which enabled him to feel the steady rise and fall of the man’s extraordinarily firm chest as he breathed. Their thighs were pressed together as well, and everything Anthony had assumed about the strength and power in Barrett’s legs seemed to be proven with the contact.
There was just enough light bleeding into their hiding place through the French doors for Anthony to see Barrett’s expression fully. The man had a wild, hungry look in his eyes that sent shivers through Anthony’s confused and rebellious body. That look alone was worth a thousand touches and was headier than any delicious scent. More alarming still, Barrett’s gaze seemed to fall to Anthony’s lips. The mad idea struck him that Barrett might kiss him. Madder still, Anthony found himself wondering what that would feel like. No, not wondering, longing.
“Found you!” Eliza’s call from the other side of the room was followed by Francis whining. A moment later, Bolton was heard exclaiming as Eliza found him as well, then Seymour.
Anthony hardly noted any of it. He had suddenly become aware that Barrett’s hand had somehow found its way beneath the hem of his jacket and rested on the back of his hip. In fact, with a simple gesture, Barrett could be caressing his arse. That thought had Anthony breathing shallowly and breaking out in a sweat. It also had his cock stiffening in a way that would prove mortifying if he were to shift in the wrong way and press that part of himself against Barrett. Although, if he did make that gesture, he wondered what Barrett would think, what he would do.
Enter here:
a Rafflecopter giveaway
If you Can't See the Rafflecopter, please visit the Giveaway page directly
In addition, you can catch up on After the War Book 1, Between His Lover and the Deep Blue Sea by downloading a free e-book!  Here's the link to find it in all the places: books2read.com/u/bze5Rj 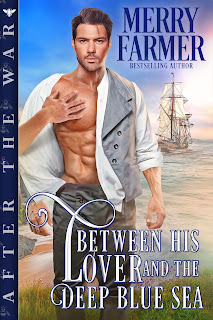 Sailing Master Septimus Bolton has spent his entire life at sea…in more ways than one. Now that his ship has been decommissioned at the end of the Napoleonic Wars, he has nothing to do but accept the invitation of one of his fellow naval officers to convalesce for the summer at a remote country estate in Yorkshire. Septimus would do anything to get back to sea…
…until a pair of blue eyes and a mischievous smile tempt him to forget everything, including discretion.
Adam Seymour has had to fight for everything he has, from the scholarship that allowed him to attend university to the right to be himself. Now, as tutor to the Duke of Malton’s precocious children, he has a comfortable life in a grand country estate far away from ridicule. His goal of starting a school for underprivileged children once his noble charges outgrow his tutelage seems well within reach…
…until temptation arrives at Wodehouse Abbey in the form of handsome, older, irresistible Septimus.
It doesn’t matter how hard Septimus fights his feelings for Adam, the two men can’t seem to stay away from each other. But when Septimus is offered the chance of a lifetime in the form of the ship he’s always wanted to command, he will have to choose between the possibility of lifelong love and the dream that is finally within his reach.
PLEASE BE ADVISED: Steam Level - Smokin' hot! This includes explicit scenes between male lovers, so if that isn't what you want to read, please feel free to pass on this book.
giveaway