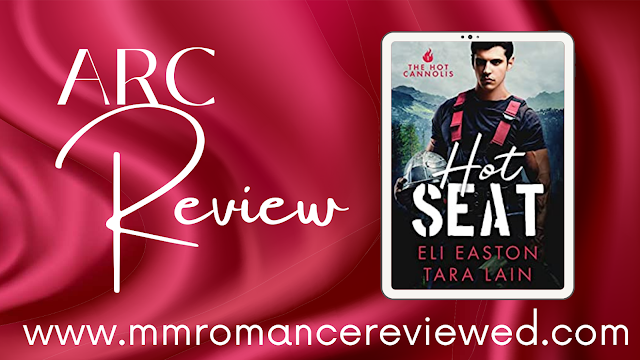 “Love is a gift, but it can’t have too many strings or you compromise yourself. If you have to change who you are to be loved, then it’s not really love, is it?”
From the Hot Seat Blurb: 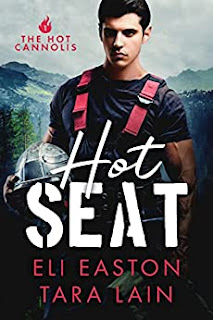 Wait. Can a Canali be gay?
Hero firefighter, youngest of six macho Italian brothers and—in love with Shane Bower, who never met a unicorn T-shirt he didn’t love? How does that even work?
When Mike Canali meets Shane Bower, his attraction to the guy is off the charts. But then his huge family and intense job full of rules and expectations intrude and he never calls.
Until they both get a medal—
and his mom falls in love with Shane at the ceremony—
and all of a sudden Shane’s all over his life, whether Mike likes it or not.
The butch Canali family face-to-face with sparkly Shane Bower? This is a wildfire of its own.
Shane worked damned hard to be who he is—fantastic, femme and in-your-face. He won’t compromise that, even to have the super-hot man of his dreams. But can he really ask Mike to give up his family and future just to have his fabulous self? Especially when he’s falling in love with the Canali family too?
HOT SEAT is a hot firefighter, big crazy family, coming out, opposites attract, forced proximity, romantic comedy—with all the feels.

My god Hot Seat needs to come with a warning!

Mike is a firefighter from a good catholic family. He is also gay and hiding this from his family. Shane is out and proud but at the cost of his family who disowned him when he came out. Two very opposite men who find that it’s not just fires that cause sparks.

I loved this book although it definitely needs to come with a warning as I was both laughing and sobbing at different points. I loved the Canali family. They are just so larger than life and such a fantastic Italian family - I kind of want to be adopted by them! Shane is so out and proud and I loved how open he was and how strong he was in the face of prejudice.

This book was so gripping and I really didn’t want to put it down. I hope that this isn’t the last we see of the Canali’s as I am in love with the whole family at this point!

I enjoyed this new series opener from the talented duo of Easton and Lain.
Mike comes from a super traditional Italian family made up of mostly what some people would call ""manly men"". He's known he was gay since he was a boy, but with a family like his coming out anytime soon isn't even on his radar. Not only are some of the men in his family outwardly homophobic, but he also just started working as a firefighter at the same station as one of his outspoken older brothers. Mike loves his family, but he cant help but wonder if they'll still love him if he showed them who he truly was.
Honestly, this was very much Mike's story. Shane was just the catalyst that sparked Mike to do some serious soul searching. Mike finally found a man he wanted to be with in Shane, but he so desperately wanted to hide that part of himself. Internalized homophobia is quite present in Mike's mind where all he's really experienced is his own families uber ""macho"" culture. I know I keep mentioning that, but it really was in your face throughout the book and lead to a lot of the angst between Shane and Mike.
It's not until an event that has severe consequences occurs that Mike realizes he just can't hide any longer. I was on pins and needles the entire time leading up to his family finding out. I had no idea which way each person was going to lean. I mean I had my guesses, but little things along the way made me second guess my assumptions.
The story ends on a HFN with a little teaser I'd call it about who the next book is going to be about. Since the series is called Hot Cannolis I know they are likely to be paired up with one of the Cannolis, but I seriously can't decide which one. I'm also hoping down the line that a certain cardiovascular surgeon snags himself a Cannoli as well. Time will tell!
Rating: 4 Stars
Heather's Review:
I wish I'd known before starting Hot Seat, that there was a free prequel called Fireman's Carry, featuring Mike and Shane's initial meeting.  I think the authors do a good job giving the gist of the meeting and what they endured in their initial encounter, but I think I would have felt less like I was jumping into the middle of things if I'd read it first.  (So go read my review of Fireman's Carry if you haven't grabbed it from YBBB)
This book, like the prequel, was about balancing expectations and reactions.  It deals with a lot of family and religious homophobia and 'traditional' views of family.  It also deals with the mental health aspects of hiding one's identity... but even within the story are elements of sweetness and fun that keep it balanced enough for hope to grow.  The story has good pacing and a realistic feel.
Triggers for: Homophobia and internalized homophobia
Rating: 4 Stars
4 Stars 5 Stars angst Coming Out Firefighter Heather homophobia Hurt/Comfort Jacqueleen Opposites Attract Reds Book Reads Trigger Warning