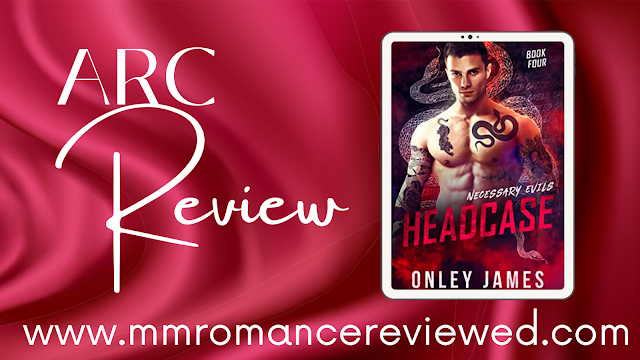 They say opposites attract and never has that been truer in this book when an investigative crime blogger meets a psychopathic murderer.

From the Headcase blurb: 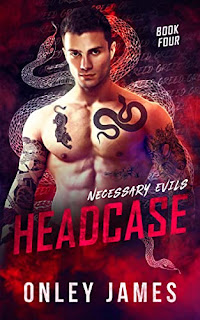 Asa Mulvaney is half of a psychopathic whole. He and his twin brother live together, party together…kill together. In the Mulvaney family, murder is the family business and business is good. So, when an experiment separates Asa and his brother, Asa is forced to navigate the world on his own for the first time in his life.
Zane Scott is a small-time crime blogger, but he dreams of a byline in a major paper and his suspicions surrounding Thomas Mulvaney are about to make that dream a reality. When an invitation to a boring fundraiser lands him not beside Thomas, as he had hoped, but Asa Mulvaney, they share an intensely passionate encounter that leaves Zane trapped in a cage of his own making.
At a nearby college, a cluster of suicides isn’t what it seems. When Asa’s father asks him to look into it, he sees the perfect opportunity to exploit his little crime reporter and make him fall in line. And Asa needs him to fall in line. Zane is suspicious of Asa’s motives and half-convinced he’s dead either way, but he won’t say no to a chance to peek behind the Mulvaney family curtains.
As the two unravel a sinister plot, Asa’s obsession with Zane grows and Zane finds being Asa’s sole focus outweighs almost anything, maybe even his career—which is good for Asa because loving a Mulvaney is a full-time job. Can he convince Zane that he’s worth navigating a family of psychopaths and tolerating an almost too close for comfort twin? Or will Zane learn the hard way that the Mulvaney boys always get what they want? Always.
Headcase is a high heat, intense, lovers-to-frenemies, psychopath romance with an HEA and no cliffhangers. It features an obsessive, calculating psychopath and a wannabe reporter who will stop at nothing to earn himself a major byline. As always, there’s gratuitous violence, very dark humor, enough killers to fill an auditorium, and enough heat to melt your kindle. This is book four in the Necessary Evils series. Each book follows a different couple.

I have loved all of the books in this series so far and I have been waiting with baited breath for the twins stories. The first one up is Asa who is an architect by day who finds himself being roped into attending an event by his father. While there he meets Zane who is convinced there is more to the Mulveney family than meets the eye and is determined to investigate.

I loved how unashamed Asa was and just how protective he was over Zane right from the start. I would say this might be one of the kinkier books in the series so far but it was absolutely fantastic! I adored Asa and Zane and I loved finding out more about the twins’ relationship and I can’t wait for the next book in the series which is Avi’s story