Doll Parts is book 4 of the Game Series, but can be read as a standalone. Almost all of Cara's books are created so you can read them at your own pace.
From the blurb: 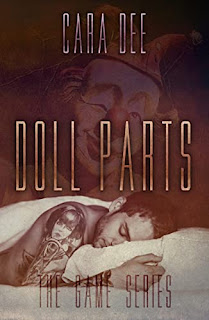 I have the best boyfriend in the whole world, but there’s one thing I won’t tell him. It’s that I don’t believe in absolute happiness anymore. Not with the cards we’ve been dealt. I mean, come on! Why do we fall for people who don’t want us back? While he’s been pining after Lucian, one of the Masters in his kink community, I’m the lovesick monster-puppy Little who can’t forget my former stepdad KC. Or the kinky porn I once found on his computer…but that’s beside the point!
It’s complicated, to be honest. I try not to think about it. I have Cameron, and I love him so damn much. Why can’t we try to make it on our own? Why does he want us to find a Top that’s just ours? It won’t work. Our stupid hearts refuse to move on.
What’s even stupider is that Cameron insists we seek out a Dom for our relationship in the very kink community where we can find both KC and Lucian.
Ohhh crap. I think he’s got a plan.
The Game Series is a BDSM series where romance meets the reality of kink. Sometimes we fall for someone we don’t match with, sometimes vanilla business gets in the way of kinky pleasure, and sometimes we have to compromise and push ourselves to overcome trauma and insecurities. No matter what, two things are certain. This is not a perfect world, and life never turns out the way you planned.

Doll Parts did not disappoint. While I have followed Cara and her books since her fanfiction days, I was a bit iffy on this one. The last few she has released just were my thing, even though I love her style. This book though was different. It was raw. It was real. And it pulled me in from the start.

This is the first book of Cara's that has ever made me cry, and it wasn't even a sad part. It was a happy cry. I so can't wait to see what she brings us next.