Brushed with Love by Fearne Hill 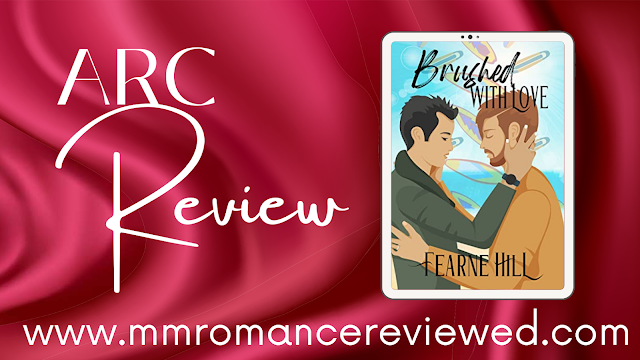 In their own different ways, it had taken a world-famous actress, a perma-tanned footballer's wife, an uptight wanker of a literary agent and a shaggy, stoned Devonian surfer to tell me what, deep down, I think I knew all along'

From the Brushed With Love blurb: 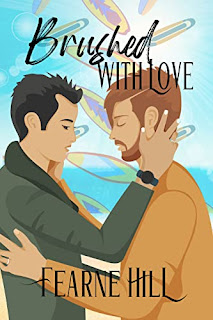 Clement Constantine Church is a hot mess. With deadlines to meet.
Whereas the striking Viking redecorating his seaside cottage is simply hot.
As a precocious teen, Clem wrote a best seller. Now he writes for other people. Too busy contemplating his bleak career and panicking about pretty much everything, he doesn’t notice that the gorgeous surfer slapping paint across his bedroom walls has a top-notch flirting game. Nor that the body hidden underneath his white overalls should come with its own government health warning.
Anyhow, apparently the Viking is straight.
After one too many unwise hookups, Ragnar Aleksander Sigurdson Eggebraaten needs to lay low and avoid romantic entanglements. Which means there is zero chance he’d ever fall for a lonely writer. Not even if they pretended to be fake boyfriends during a weekend trip to London. Not even if there was only one bed. And especially not if he’s planning on leaving England at the end of summer to fulfil his dream of setting up a surf school.
Can surfer Vikings fall unexpectedly in love? And are failed writers allowed to write their own happily ever afters?
Brushed With Love is a warm and funny romance set in the UK. Trigger warnings include cosmic lizards, feisty octogenarians, and a spoiled shih tzu.
Sheena's Review:
5 wonderful viking stars.
I am so glad I discovered Fearne Hill last year. Her Rossingley series was my favourite of the year so I was of course chomping at the bit to be able to read this new story. After finishing I NEED Fifty's story and I understand it's on its' way (YAY!).
It's the tale of two complete opposites - a surfer with enough confidence to fill Wembley Arena and with a revolving door of bed partners, and a reclusive award-winning author with severe writer's block. On the surface that's how it starts, Eggy being said surfer and Clem the writer. However we slowly peel away those surface layers and find out more about both Eggy and Clem as the story unfolds.
Eggy is such a complex character, he's been through so much after not voluntarily leaving his home and pitching up in Devon where he met his best mate Fifty. Yes, these are nicknames but I'm not going to be the one who spoils for you where they came from! There's an initial attraction between Eggy and Clem but it's a slow, sweet burn until they do get together. Honestly, the train reading scene made my heart hurt, it was so lovely (and great choice of book in The Captive Prince too). Once they do get together, the heat levels are insane, these two cannot keep their hands off each other and it's HOT.
It's such a great story of two people finding what they didn't realise they needed in each other and working towards that happy ending. It's so well written, both Clem and Eggy are wonderfully realised and the supporting cast is great too. I do need Fifty's story and I hope it's with someone we meet in this book ;)
This was an utter joy to read, it's 5 stars because it made me laugh out loud more than once, and it made me cry and left me wanting more. Perfect.
SNik's Review:
Opposites attract but if it's only a summer fling what happens when they fall in love? Can true love happen between a charming viking surfer and an anxious intellectual writer? In a Fearne Hill story of course they can.
Brushed With Love is the first in a new series (Surfing the Waves). Opposites attract. Fake boyfriends. Slow burn. Dual POV.
Playboy, viking descendant, surfer and house painter Eggy has one last summer in England before starting up his surf shop in the Canary Islands, and he’s set his sights on having a relationship with prodigy writer and bibliophile Clem, who is currently suffering from writer's block and ghost writing while having his inherited cottage painted. Building a friendship, Clem thinks Eggy is straight, and Eggy is trying to rein in his usual routine of hookups only, volunteering to be Clem’s fake boyfriend. Eggy is earnest in his pursuit of Clem, and while Eggy is charming and social, Clem struggles with anxiety and is not very social. Background for both Eggy and Clem is meaningful and gives depth to the characters, there is a fun secondary cast of characters, and the expiring timeline on the relationship provides tension as Eggy and Clem’s relationship turns into something much more than a summer fling.
Loved both Eggy and Clem, they are both likable, sweet and fit each other in a different way than having similar interests or upbringing, it’s their personalities and individual qualities that combine to make a romantic and caring relationship. Thoroughly enjoyed this story from start to finish and of course their HEA. Can’t wait for more of this series.
Brushed With Loveis currently available in e-book and paperback and can be read as part of your Kindle Unlimited Subscription
5 Stars ARC Contemporary Fake Boyfriends Forced Proximity funny KU Series Sheena slow burn SNik