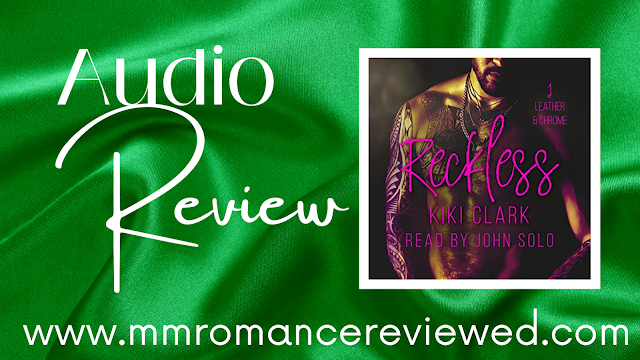 Prison pen-pals become so much more in Reckless: Leather & Chrome book 1 and Laora experienced it in the audiobook form:
From the blurb: 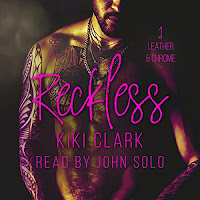 Ride hard. Love harder. Live recklessly.
Tank is done with his old life. All it's brought him is trouble and misery in the form of a four-year prison term. Though he did find one good thing while behind bars: Charles "CJ" Crane, pen pal extraordinaire.
After months of exchanging increasingly personal letters, Tank knows exactly where he's headed as soon as the prison gates open. CJ doesn't know he's coming, and he's not sure what he'll say when he gets there, but he knows one thing for certain.
The promises he and his boy made to each other in their letters may have been reckless, but he's willing to risk everything he’s got on finding out if what they have could be real.
Reckless is the first book in the Leather & Chrome series and features a motorcycle club's annual charity ride, a possessive biker whose new favorite color is pink, a 24-year-old overly eager to experience his first time, and an excessive appreciation for perfectly lined tattoos.

It has been a while since I read (or listened to) a book by Kiki Clark. And it was good to get back to her writings. I am looking forward to the other books in the series, be it in writing or audio.

CJ and Tank met through a pen pals scheme for inmates when Tank was incarcerated and CJ was roped into the scheme by his friend.

After Tank his release he goes in search of CJ as they wrote about meeting. Their writing are personal and became more spicy.

When they meet they hit it of and due to circumstances move in together quickly. They fit in really well with the inclusive Motorcycle club with a difference to which Tank transferred after being released. They also explore and discover their kink site. The Motorcycle club turns out to have a a real social conscious and I love to see how that will cone to the for in future books.

I have listened to a fair few of the books narrated by John Solo, but I find he seems to have a certain way for a type of character, so I am bit disappointed by his narration

Reckless is available in kindle e-book, audio book and paperback!  If you haven't tried Audible, you can try Audible Premium Plus and Get Up to Two Free Audiobooks!