In many ways, Paolo knew that he and Kurt were total opposites. Almost incompatible on the face of things. But somehow, the chemistry was there. The connection was very real.

From the A Little Fun blurb: 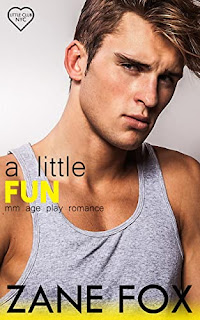 A wounded Little. A broken Daddy Dom. Sounds like they both need a little fun...

Kurt Slater is tired of playing games. Shame it's his job. He's in training for the most important videogame tournament of his life. But when an injury threatens his future career, he's got nowhere to turn.

Paolo Rossi used to be a big deal - until a broken leg robbed him of the chance to make it in the world of sports. Now a massage therapist, Paolo's past has made him grouchy and cynical. He's forgotten the joy of play. And although he's a Daddy Dom, he hasn't been in a relationship for a long time. He's too worried he'd be a bad match for a Little because of his sour mood.

When fun-loving but suffering Kurt turns up at Paolo's massage practice, the attraction is instant. But so is the tension — worried about how much he likes Kurt, Paolo refuses to treat him.

Soon, though, his Daddy Dom instincts take over, and he prescribes a very unusual course of treatment: strict rules, a set routine, and a focus on nutrition. And, of course, lots of time in Little Space.

But will Kurt be able to take Paolo's stern discipline? And will Kurt teach Paolo how to enjoy life again?

This is an MM Age Play romance featuring consenting adults who are perfect for each other. It includes spanking and other impact play, suspense, sweetness, and a full-blooded Happy Ever After. Enjoy!

A Little Club NYC book that can be enjoyed as a standalone with no cliffhanger.

a little Fun is the second book in the series and we meet up with the three littles Kurt Sammy and Damon. This book is all about Kurt, a gamer and little who has to deal with a setback and betrayal. And Paolo, a former tennis star and now massage therapist and daddy who meets Kurt when Kurt is referred to him. They soon discover they are good for each other Paolo needs a bit of playfulness and Kurt more structure. They hit several obstacles but find their hfn/ hea with their friends in this sweet mm age gap daddy/ little story. I would have liked to see that the two persons who 'made trouble' for both guys have their comeuppance.