Katherine McIntyre hooked me on her Dungeons and Dating series in the first book, and her follow up, Wisdom Check? It has further sank its claws into me and made me eager to read the next installment and discover what is next for the crew at the game shop. 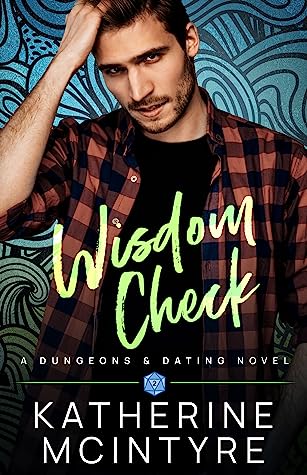 Cal Morgan’s life was going right on plan—got the wife, the baby, and the board game café he opened with his best friends. At least, until his wife dropped the dreaded ‘d’ word. Newly divorced and juggling custody of their toddler with his ex, Cal’s dreams of a family are burnt to ash.

Julian Hale’s been carrying a torch for his sexy boss, Cal, for far too long. As the oldest of five and surrogate mom to his siblings, Julian gets tugged in so many directions that he’s never made time for himself—his wants, his desires—and he definitely desires this man.

However, when Cal starts turning those scorching stares Julian’s way, he can’t resist, even though he should. They’re boss and employee, and Cal’s fresh out of a divorce with a two year old—it’s a recipe for disaster even if they’re both falling fast. But when Julian’s application to nursing school gets accepted, he’ll have to choose between pursuing the dreams he set aside when his mom died or the one man he could imagine a future with. Life taught him early on that he’ll never get both.

Roll the dice on romance at Tabletop Tavern…

Heather's Review:
Wisdom Check is one of those stories where you start at just the right place and end up in a better one... I didn't read the first book in the series, but Katherine McIntyre does a really good job of fleshing out the circumstances that the characters start in - and the overall setting for the book, so I didn't feel like I was playing catch up (although it made me want to go back for Mel and Roxie's story even though I don't typically read FF Romance)
Cal is such a cinnamon roll and honestly Julian is a sweetheart too - and you are rooting for them to get together from the minute Kat introduces them to us in the story.  Even through the angst, the ex-wife drama and the secrecy, you see their bond...
Wisdom Check is perfect for you if you love the idea of a second-chance, Nerd Love story with some Gay-ming and an adorable two year old girl!

Wisdom Check features Cal and Julian. Cal is one of the owners of the store, a recently divorced father who dotes on his little girl. Julian is the head chef, Cal's employee, and on paper, a bad idea. However, the two of them are drawn together with a deep attraction that feels more than surface deep. As the readers get to know them, they see how deep that connection really goes and how the two men share a lot of things in common.

I think what I enjoyed most about these two characters was the strength of their connection. They seemed to know, easily, what the other wanted and needed. They had a fairly good style of communication. Cal understood what Jules had going on in his life with his siblings and Jules was great with Cal's kid. I also love the found family of the game shop.

Now that's not to say that this book was without flaws - or more importantly, that the characters weren't. Jules sometimes had a hard time vocalizing certain things - which lead to some miscommunications in the back half. My biggest issue, though, was the portrayal of Cal's ex-wife. She was a complete ice queen and seemed to have little to no redeeming qualities. Just the way she was portrayed made me wonder why Cal had stayed for as long as he did. I think I would've enjoyed the story a bit more if the ex-wife weren't written as a one dimensional villain archetype.

Luckily, those small things were overpowered by the rest of this amazing novel and I didn't feel a need to knock it down a star.

Wisdom Check is relatively low angst, even with the ex-drama. It is told in a dual pov, which lets us get to know both MCs and what they're going to really well. You get a nice peek in at Roxie and Mel, as well as a cute tease for the next book sprinkled throughout the series. Both of the MCs have a good full life outside of their relationship, which I love, and makes the relationship seem like icing on the cake and not the whole meal. All in all, this book was a delight and I'm looking forward to reading the next one.