Touch of Gray by Della Cain

Touch of Gray is the third book in the Country Daddy, City Little series, but can be read standalone if you're looking for this book... 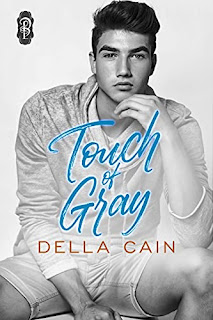 A daddy for the semester is better than no daddy at all.
Tyler Gray lost his apartment, his scholarship, and his job all in one week. Lost and alone, he needs to find a way to finish the last semester of his degree. If only it were that easy. Finding a job wasn’t the issue—it was finding one that would pay rent and allow him to save up for tuition, and going home wasn’t an option. Not since he introduced them to his ex-boyfriend three years earlier. When Tyler sees a job that includes room and board, he jumps on it. One semester there, and he would be back on track.
Liam Peters spends his days as ranch manager and his nights alone. He tried the dating-app thing. He met some fun guys, but they all wanted a night of passion, not a morning cuddle. Liam was officially done with dating. That is until Tyler walked onto the ranch as the new hand.
Tyler knows what he wants in a man. He wants a daddy, and Liam is just the man to fill that role. He might only have a few months on the ranch, but he plans to make the most of them.
Touch of Gray is an age gap MM romance featuring a smexy cowboy discovering he’s a daddy, a little who knows what he wants and isn’t afraid to go and get it, age play, a roll in the hay…or two, and two men discovering opposites really do attract. Touch of Gray is the third book in the popular Country Daddy, City Little MM romance series. Each book focuses on a new couple who find their Kinkily Ever After and includes some familiar faces from Collared Ever After.
Heather's Review:
Touch of Gray is a good example of instant attraction meets interesting communication, resulting in an exploration of what a daddy/little relationship can be...   I like that the couple meets because Tyler thinks outside of the box for himself and looks for a job that includes room and board.  I like that both the daddy/boy relationship and the little relationship aren't the very first points of attraction, although Liam definitely gives off Daddy vibes from the very beginning...
Touch of Gray is trademark Della Cain - sweet, a little bit sassy and definitely sexy and it offers up a glimpse of what good communication and a steamy attraction can bring to a daddy/little relationship.
Rating: 4 Stars
4 Stars Age Gap Age Play ARC Cowboy Daddy Heather little Opposites Attract