on January 20, 2022
So excited to share this week's Throwback Thursday - Just a Little Temptation by Merry Farmer - a historical M/M Romance that is just so much fun...
The Blurb: 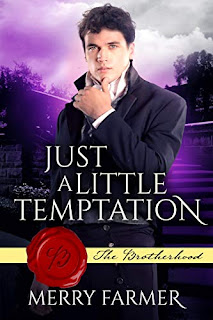 "As the owner of an orphanage in a poor neighborhood of London, Stephen Siddel has the weight of the world, not to mention the care of tender souls, on his shoulders. He is a devoted father to dozens of children and an upstanding member of the community, in spite of his rivalry with the local nuns. But his heart and his reputation are overwhelmed by temptation the moment Max walks through the orphanage’s doors.
As a younger son from a grand family, no one expects much from Lord Maxwell Hillsboro, but he is determined to make a difference in the world, starting by patronizing a certain orphanage members of The Brotherhood have told him is in need of help. His heart is instantly engaged in the causes and concerns of the orphans, or rather it’s dashing and seductive owner, Stephen. Max feels he’s found his calling, even though his involvement could put both him and Stephen in danger.
But when some of the children from Stephen’s orphanage and the rival Catholic orphanage go missing, Stephen and Max must band together with the imperious Sister Constance to find them. What they discover is a much bigger kidnapping ring that requires them to join forces with David Wirth and Lionel Mercer of the law offices of Dandie & Worth. Can they rescue the children in time, or is something much more sinister going on? And will the passion growing between Stephen and Max ruin them all?"
Excerpt:

“I would never have expected a soft-hearted orphanage owner who wears spectacles to have such impressive biceps,” Max said, his smile a little too wide, as he knelt to rummage through the canvas bag. He came up with a pair of paintbrushes and something to pry the paint cans open with.
“Carrying around small children all day and doing all the manual labor around this place does help keep one fit,” he said, joining Max on the floor. He should back away, find something else to do. Alice’s final, plaintive wails of pain echoed in his memory, but even they weren’t enough to stop his heart from pounding as he smiled at Max.
As he took a paintbrush from him, their hands touched. They both lingered over the contact, meeting each other’s eyes and getting lost there. Stephen tried to summon the will to be sensible and stoic, but without a hint of luck.
“Should we start here and see how far we can get?” Max asked in a low voice laced with deeper meaning.
Blood and heat pounded through Stephen. Never in his life had he lost his head over a man so fast. But Max didn’t feel like a stranger, he felt like the limb Stephen didn’t know he was missing. On top of that, their fingers still touched as Max hadn’t let go of the paintbrush between them.
“I think that sounds delightful,” Stephen said, his voice deeper than usual.
“Delightful,” Max echoed. He leaned closer, his gaze dropping to Stephen’s mouth.
Fear and the weight of responsibility screamed in Stephen’s head, warning him to back away. But he couldn’t move. All he could think about in that moment were Max’s lips and the temptation they presented. Max was close enough for him to drink in the scent of his cologne and his skin. It felt as though he were falling into a bottomless pit and he couldn’t stop.
They were a hair’s breadth apart, so close Stephen could feel the heat pouring off of Max, so close blood pounded through him, hardening his cock, when Annie marched into the room.
“Is Lady Bardness staying for tea?” she asked.
Stephen and Max jerked apart so fast that Stephen nearly upset the can of paint by his side. The paintbrush between them clattered to the floor.
“Er, what? No.” He leapt to his feet, adjusting his glasses. He cleared his throat, feeling heat flood his face. “She’s already left.”
“Oh.” Annie’s shoulders sagged. “I was hoping she’d stay and sample the scones I made this morning.” Her expression turned moony again as she glanced up at Stephen, grinning. “I made your favorite, orange ginger.”
“Thank you,” Stephen said, still desperate to catch his breath.
Annie blinked, looking past him to Max, who was red-faced and furiously slapping white paint on the wainscoting closest to the doorway. “Oh, Lord Hillsboro.” She managed a quick curtsy. “I didn’t realize you were here. Would you like some tea?”
“Um, why, yes. That would be nice.” Max smiled guiltily at her and continued painting, sloppily enough to drip white on the floor.
“I’ll fetch it right away.” Annie smiled, twirled toward the door, and skipped on her way.
As soon as she was gone, Max burst with laughter. “I can’t believe she didn’t see that.” He sent Stephen the most adorable, guilty look.
Just a Little Temptation is available on Kindle and Kindle Unlimited!  You can also order a paperback copy.
#TBT #ThrowbackThursday