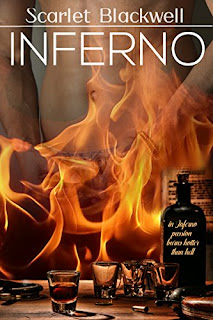 After the murder of a notorious rent boy in the relatively new gay nightclub Inferno, Moonlight Cove cop Zack Stewart and his partner Claire Keaton are presented with a bewildering array of suspects, all with links to the dead man.

Zack’s chief suspect is arrogant club owner Dante Jardine, a man not so easy to unravel, and even more difficult to pin down. Soon the cops are knee-deep in bodies and Zack’s priorities become more muddled the longer he is around Dante.

When his professional and personal lives begin to merge, Zack finds himself walking a dangerous road between being a good cop and giving in to his growing desire…

Zack pulled his cell out of his pocket and connected to the precinct, asking for backup to take two suspects downtown. As he finished the call, he was already on his way up the stairs, heart pounding in his chest, his breath coming in rasps.

The third floor balcony was empty. He barged into Dante’s office without knocking.

Dante looked up from his desk in astonishment, his eyes narrowing when he saw Zack.

“Detective Stewart, what a pleasant surprise.”

“I said stand up, you murdering son of a bitch. Don’t make this hard.”

Dante shoved his chair back, his face cold as ice and limped around his desk. “Why not? I thought you liked it when I made it hard?” His violet eyes were fixed mockingly on Zack and Zack flushed violently.

“I don’t think so.” Zack grabbed Dante’s arm and pulled him around, twisted it up as hard as he could, feeling foolish that he had nothing to cuff his suspect with.

Zack yanked Dante’s arm so far up his back he fully expected to hear the shoulder dislocate. Dante’s legs bowed. His free hand gripped his desk.

“What did you say, you bastard?”

“You heard me. Last night when you shoved me against the wall. Your cock was oh so hard.”

Zack growled. He threw Dante violently face down over his desk, scattering papers and held him there by his arm and one hand on the back of his neck, panting for breath, his fury uncontained. “You’re under arrest for the murder of Corey Breton…”

“You like me like this don’t you, Detective? Gives you some thrill of power you clearly don’t get in the bedroom.”

“Shut up! You have the right to remain silent…”

“I know my rights, you jumped-up little prick.”

Zack stared down a moment at the back of Dante’s dark, shiny head, his chest heaving. He could barely think for the anger swarming through his veins. God, how he longed to pull Dante’s arm just an inch farther and see what happened.

His gaze darted away as a uniformed cop appeared in the doorway. “Detective Stewart?”

Zack let go of Dante immediately. He staggered back dizzily, clutching his head. “Read him his rights.”

The cop reached for his cuffs. He pulled an unresisting Dante upright and cuffed him with far less brutality than Zack had shown. He led Dante out of the office and Zack sank into the still warm chair at the desk and felt endless shame.

Inferno is available in Kindle Unlimited and as a paperback!  Let us know if you grab Inferno this weekend!