The Other Brother by Jax Calder

on January 12, 2022
Having read Jax Calder's adult MM Romance, I was interested to see what their take on YA/NA would be in The Other Brother...
Blurb: 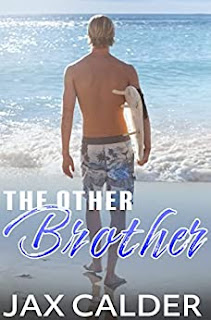 What happens when you fall for the one person you can't have?
Ryan has had seventeen years of being compared to Cody, part of his toxic fractured family, so you’ll forgive him for some epic eye-rolling when it comes to Mr. Perfect. Although not related to him by blood, Cody has always been annoying background noise in Ryan’s life. It doesn’t help that Cody’s a high achieving musician, while Ryan’s life ambition doesn’t extend past catching the next wave.
One summer changes everything. It’s the summer when circumstances collide, and Cody and Ryan end up spending time together at Cody’s family’s beach house. It’s the summer Ryan teaches Cody to surf and Cody teaches Ryan to play guitar. It’s the summer when they become friends.
And then more than friends.
But when summer ends, Cody and Ryan are forced back to reality, where they must hide their relationship from their warring family members. And as tragedy strikes and family secrets buried deep in the past worm their way to the surface, their relationship is threatened. Can their feelings, which began in the summer sun, survive the winter ahead?
Heather's Review:
The characters use the Romeo/Juliet reference several times in the The Other Brother to describe their story - hatred between factions that prevents them from being together as young lovers... and the added twist of having two half-siblings in common means that the factions come together more often...
What I love about this book is that family dynamics and the strong parental leads of Cody's father and Ryan's mother who divorced before either was born play in the development of their relationship and the angst about being together...  There is also stress from Cody's parents about his life choices and it juxtaposes the life that Ryan leads.
I really enjoyed the interplay between the main characters and the family angst that was part of this story.  The Other Brother was well written, well paced and I recommend it to anyone who likes a story-driven romance with age appropriate steam and some good plot twists!
5 Stars Enemies to Lovers low heat New Adult YA