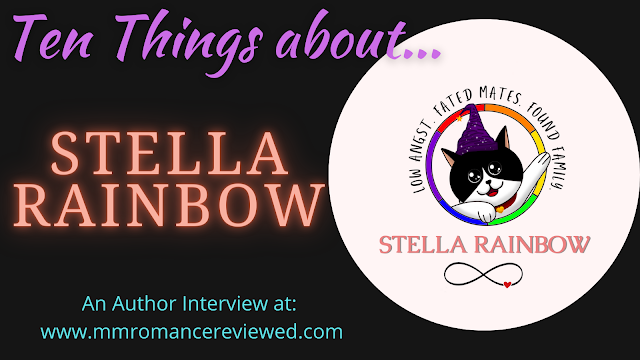 Okay y'all... I've been interviewing authors for about four months and a few have said shocking things... but no one has floored me with an answer like Stella Rainbow... read below and let me know in the comments if you agree with me... let's get right to the heart of why we're here - a few more than ten things about Stella Rainbow:
Indie or Traditionally published?

I'm 100% Indie, and I love it. I'm kind of a control freak, so I love and appreciate the freedom self-publishing gives me.

I'm a pantser through and through. I've tried my hand at planning books, but all I end up doing is losing interest in writing the story. I prefer discovering what happens next as I write. As for keeping track? Spreadsheets. Lots of them.

My first MM romance was actually contemporary, and is currently unpublished. I hope to get it out there someday again (hopefully soon) because I adore the story. It had Harry Potter references, a three-legged cat, hurt/comfort and a great roommates-to-lovers romance that I really want to share with my readers again.

and then your most recent one.

My most recent release (released Jan 14) is the first book in a new PNR series, Maximus. It features a workaholic soul collector who works for the devil, a human with hidden magic, and an evil they can't seem to track down.

Writing is my only job, but I'm also a student, so for now it's more part-time. I hope to write full time soon.

That's a tricky one, mostly because I don't cook. :P I'd probably want to invite some of my own characters, especially Jai and Raphael from Touch of Magic because Jai would insist on helping me cook. I'd also like to invite Lily Mayne's characters, Danny and Wyn, because I love them, and because Wyn doesn't eat, and after all the food poor Danny has eaten out in the apocalyptic world, anything I'd make would taste good to him. xD

Something people would be surprised to know about you:

Usually, characters ignore me once I put their story out into the world, but Ro'Shassz, a magical snake from my Otherworld books, still lingers in my mind, probably because he doesn't have a story of his own.

Anywhere but a desk! I mostly write on my phone, and usually I do it first thing in the morning. After my morning tea and as I eat breakfast seems to be the best time to hit my daily writing goal, before all the tasks of the day clutter up my mind.

What are your writing goals for the next year? The future?

I'm not a planner, and when I do plan, it's usually for the next six months. For 2022, I'm planning to start publishing contemporary romance again, and my biggest goal is to publish ten books this year.

There's a scene in Angel of Death where Cassian, a six-foot-tall ginger bear of a fire mage freaks out because he has a lizard on him. I wrote that scene last year, and I still think it's one of the funniest scenes I've ever written. (Though there was also one where an elf asks a wolf shifter if he could eat chocolate, and the shifter goes, "I'm not a dog, Noel!")

The worst part is when you have ideas in your head but can't write them because you're working on a different project or because you have other responsibilities, or you're sick.

Corny as it sounds, I'll have to say my cat. Harry is at this moment cuddling up on me, and she's always there when I need to rant about how my characters were being jerks.

I accidentally discovered the MM romance genre in April 2020 when I got KU for my birthday. Before then, I'd written a few UF YA stories on Wattpad that were very directionless, but once I found MM, I just knew it was what I wanted to write. Being a closeted queer woman in a country that is still primarily unaware of the LGBTQ+ community might've also contributed a little to my decision.

Anything from memes to movies where I start shipping the side characters. I love defying stereotypes, so usually it starts with something as simple as "what if the younger, smaller guy was the top?" and snowballs into something with a whole storyline.

By ignoring my manuscript and reading books for a whole day. Usually, I hit a block because I can't figure out how the next scene goes. (pantser, remember?) So instead of forcing myself to write, I focus on other things, and a solution usually hits me when I least expect it.

My friends and my brother know, my mom knows it's romance between two men, but not that it includes steam. My friends are mostly proud, though they're not MM readers themselves. My brother mostly doesn't care either way, and I have to tell my mom repeatedly to keep my pen name a secret because I don't want most of my relatives to know.

The sense of family I get to create in my books. I love the idea of forming a family with people who you get along with rather than those you share blood with—probably because of how family-centric Indian culture is. I also love that I can give my fictional world the feeling of acceptance that I wish the real world had.

I'm always available at my email, authorstellarainbow@gmail.com
I'm also very active in my Facebook group, Stella's Stargazers. (https://facebook.com/groups/StellasStargazers)
You can also find out more about my books on my website: www.authorstellarainbow.com

Thank you for having me on your blog!