It's too cold to be outside here in Toronto today... so I thought I'd reach out to another amazing author and share a second Teaser Tuesday with you!  We'll be reviewing Wisdom Check when it comes out next week, but for those of you who read FF, you could get ready for the release by starting with Strength Check 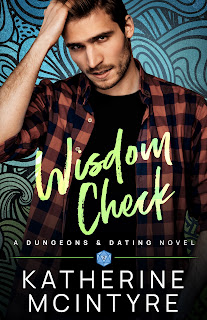 Cal Morgan’s life was going right on plan—got the wife, the baby, and the board game café he opened with his best friends. At least, until his wife dropped the dreaded ‘d’ word. Newly divorced and juggling custody of their toddler with his ex, Cal’s dreams of a family are burnt to ash.

Julian Hale’s been carrying a torch for his sexy boss, Cal, for far too long. As the oldest of five and surrogate mom to his siblings, Julian gets tugged in so many directions that he’s never made time for himself—his wants, his desires—and he definitely desires this man.

However, when Cal starts turning those scorching stares Julian’s way, he can’t resist, even though he should. They’re boss and employee, and Cal’s fresh out of a divorce with a two year old—it’s a recipe for disaster even if they’re both falling fast. But when Julian’s application to nursing school gets accepted, he’ll have to choose between pursuing the dreams he set aside when his mom died or the one man he could imagine a future with. Life taught him early on that he’ll never get both.

Roll the dice on romance at Tabletop Tavern…

The door shut with a click as Sara exited with Kay, leaving a deafening silence in her wake.

“Fuck, I’m sorry, Jules,” Cal said, slumping to the ground beside him. All too fast, the proximity of this man threatened to overwhelm, and the realization crashed down on Julian that they were alone. Just the two of them in this house.

“No apologizing for your ex-wife’s bitchiness,” Julian responded, switching from picking at the carpeting to teasing a strand from a frayed hole on the knee of his jeans. He chanced a glance to Cal who hunched forward, those dark eyes flickering with turmoil. “And for the record, your ex-wife’s wrong.”

“About what?” Cal asked, his brow wrinkling. “I mean, let’s count the ways.”

He was playing a dangerous, dangerous game, but based on the way Cal had blanched from those words, he couldn’t let Sara’s barb stand.

However, the moment he glanced Cal’s way, the breath snagged in his throat. The heat in those deep-set eyes was enough to set a forest on fire, let alone his panties. The weariness on Cal’s features melted away, and he sat here on the floor with him, those long, muscled limbs so close and his broad chest made for sinking against. The tan skin begging to be licked, the dark scruff framing a firm jaw, and the thick chestnut hair that Julian longed to tug all just revved him up even more.

“Oh yeah?” Cal responded, a single brow lifting with a confidence Julian found too damn hot. His voice was pure sex, and oh fuck, Julian was two seconds away from leaping into his lap, to hell with the consequences.

Except those consequences could cost him his job.

Julian straightened his spine, the realization like a splash of ice water.

“Thought you promised to feed me?” Julian said before he could help himself. Stop, stop, stop flirting with the boss. Christ, he had a problem, and his name was Caleb Morgan.

Cal’s lips twisted in a smirk, but he pushed up from the ground and headed for the door. He plucked the two plastic bags he’d dropped there and tilted his head in the direction of his kitchen. “I did pick up food, which we should probably eat before it gets cold. Hope you like stromboli?”

“The meatier the better,” Julian responded on autopilot. My god, what was wrong with him? The temperature in the room ratcheted another thousand degrees as Cal glanced back, his gaze roving over him from head to toe. A shiver rolled up his spine. “I promise you, I can speak without innuendo.”

“Don’t stop on my account,” Cal shot back as he led the way to the kitchen, those teasing words like a caress. It was no hardship following that firm ass, beautifully encased in black jeans. The difficult part was tearing his gaze away from it.

Julian dropped into one of the solid wooden chairs by the kitchen table as Cal brought the bags over to the granite countertop and started plating the contents. Within seconds, Cal thrust a plate of half a pepperoni stromboli and a helping of extra crispy fries in his face. Julian’s stomach rumbled on instinct because, despite working in a kitchen, he was garbage at finding time to eat.

He sank his teeth into a fry, enjoying the crunch and how the salt burst on his tongue. “Where did you get these fries? I can’t find anywhere that makes them like this.”

Cal settled in the seat across from him, those broad shoulders and his long torso making the chair seem smaller. “Picked this up from Giovanni’s and just asked for them extra crispy.”

Julian’s throat bobbed with his swallow. The only person at Tabletop Tavern who ate fries extra crispy was him, which meant Cal had gone out of his way to make sure to get the ones he’d like. That sort of consideration…fuck.

Have you read Strength Check yet?  Excited for Wisdom Check? Go ahead and check out the whole series: