Our review team was so excited to get Evil Omega that one of the team members actually bumped this book to the top of their review pile and has already submitted their review to us and after reading this excerpt I can see why...   Evil Omega comes out comes out January 14th and is currently available for preorder! 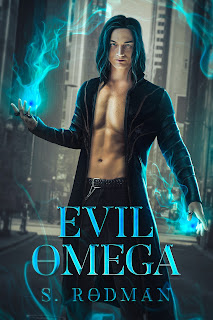 Silas Northstar is an outcast. A wolf shifter without a pack. A hated and feared necromancer, infamous for killing an entire pack. He aspires to become the true supervillain people whisper he is.

He is also an omega. Heat cycles are a fact of life, but he has no problem finding casual fun with humans to satisfy his needs. He can't imagine that ever changing. He doesn't do lonely, and he definitely doesn’t do feelings. He doesn't need an alpha.

Dean Westlake is a happy-go-lucky alpha who is trying his best to settle into his new pack in a new city. The pack's Alpha, George, is an idiot, but Dean is glad to not be alone anymore. Few packs will accept a second alpha, so he knows his choices are limited. He needs to make this work.

The rumors of the city's supervillain sound far-fetched. He's not worried.

Then the Westlake pack captures Silas. That night he goes into heat. Someone has to deal with it.

Dean gets the honor, and the fireworks begin.

The morning light shows Silas has vanished. Everyones says no one can keep Silas Northstar for long.

Dean vows to prove them wrong.

They made it to the top of the embankment and together they watched the body disappear into the inky waters of the canal.

Dean quietly took his hand and gave it a reassuring squeeze. His hand was warm and strong. It was nice. Silas supposed he should feel something as he watched the last Greenwood pack member sink to his watery grave. His vengeance was now complete.

But mostly he just felt tired. Weary. It wasn’t like he had spent the last ten years actively looking for Michael, more like just keeping an eye out for him. However, he still felt a little directionless now. What was the purpose of his life now? More fighting, running, hiding?

An unsettling thought suddenly hit him. Would the ancient power that had seeped into his dying body that night now leave him? Return to its slumber now it had completed its revenge on the horror it had witnessed?

A quick, anxious, internal check confirmed the dark magic was still coiled contently inside him, showing no signs of going anywhere. Silas took in a deep, shaky breath, more relieved than he cared to admit. He no longer knew who he would be without it. It was his lifeline, his identity.

Maybe the darkness wasn’t done with revenge. Many people had hurt him in one way or another over the years. His father, the vampires, the coven, Dean’s boss. To name but a few. Was his whole life to be a never-ending cycle of revenge? It sounded exhausting. Exhausting and hollow.

Suddenly Dean was pulling him close. Gentle fingers on his chin, tilting it up. Green eyes regarding him hungrily for the briefest of moments before Dean leaned in and his lips descended on his own.

The kiss stole Silas’s breath away. He couldn’t stop his moan of delight or his knees weakening. Dean tasted of everything good and everything he needed. The kiss was hungry, possessive, as if Dean wanted to take every inch of him and keep him forever.

He felt Dean’s arms encircling his back, pulling him even closer, holding him as if he never wanted to let go. Silas returned the kiss passionately. With fire. He wanted to both consume and be consumed.

His cocked swelled, and a need grew between his legs. Suddenly, he wanted nothing more than for Dean to throw him on the floor and take him. He wasn’t even in heat or anywhere near being in heat. He’d never felt a longing like this. It was unsettling.

He pulled away, stepping back. It was far harder to do than he liked.

“Stop that,” he said and winced at how breathless and needy he sounded.

Dean grinned, green eyes flashing as he stepped forward to capture him once more. Silas raised a hand and pushed against the alpha’s broad, firm chest.

“No! I have shit to do,” Silas insisted.

Dean raised an eyebrow and smirked. A devilish grin on his face. “Oh yeah, Angel, like what?”

Silas whined in annoyance. Why was the alpha so damn tempting? Why did that stupid pet name do things to his insides? It was so infuriating. “Like clean up a murder scene. I don’t want human cops on my back along with everyone else.”

Silas thought offering to help clear up a murder scene was the most romantic gesture he had ever heard of. Regretfully, Silas shook his head. He wouldn’t be able to control himself. They’d end up making out in the crime scene, leaving all sorts of DNA everywhere.

Dean sighed heavily, disappointment clear in his wolf-hued eyes. “Fine, I guess I’ll see you on the thirteenth.”

The alpha smiled gently. “When your next heat is due.”

Silas felt his face flush and hated it. He did not want Dean to see he was rattled. There was something so incredibly intimate about Dean working out his heat cycle. Silas did not know if he hated it or loved it. Either way, it rendered him completely speechless.

He nodded and instantly cursed himself. Why the hell was he agreeing to spend his next heat with Dean? So what if that was what he had done for his last three heats? It meant nothing. Maybe this time he’d fancy some fresh meat. Lord knows there were plenty more fish in the sea.

But Silas realized with growing horror that the thought of spending his heat with anyone else made him feel sick. Physically sick and queasy. As if there was nothing worse in the world. Silas wondered in horror when that feeling had taken root, how on earth had it happened and more importantly, what the hell was he going to do about it.

Completely flummoxed and utterly out of his depth, Silas turned on his heels and fled.