Shouting Match is the beginning of a brand new Pandora Pine series, and what a beginning! 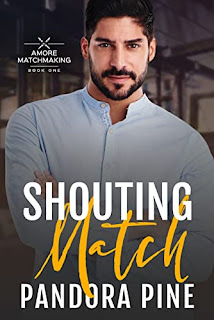 After the death of his father, Capone Lombardi was tasked not only with keeping his father’s legacy alive, but also to look after his mother and three younger brothers. Putting his own love life on the back-burner, he’s spent the last five years ensuring the family restaurant, Lombardi’s, thrives. It’s pretty sad that the closest he’s gotten to cuddling is nearly being arrested by a ridiculously hot cop with a hard-on for speed limits.
Forty years old and sick of one-night stands and prowling the bar scene, Detective Fuller Sims goes to local Italian restaurant, Lombardi’s, one night for drinks. What he’s not looking for is the youngest Lombardi brother to talk him into his matchmaking scheme. But Fuller is tired of being alone, and Brando Lombardi insists he knows exactly where to find the man of Fuller’s dreams—his overworked older brother, Capone—the guy Fuller almost arrested a few hours earlier.
Taking a chance on each other, Capone and Fuller find out that Brando might have matchmaking skills after all. When a blizzard sets its sights on the rugged Maine coast, a shouting match between the new lovers sends Fuller out into the raging storm. Can Capone find him before it’s too late?
Shouting Match is book one in the exciting Amore Matchmaking series. It features four gay brothers, their eccentric mother, an ornery goat, and way too much pasta.
Heather's Review:
I love when an author creates a new world for us and we get to experience little bits of future main characters while we are introduced into the environment with the main characters in the first book! Without truly diminishing the storyline of the main characters in Shouting Match, Pandora Pine does this incredibly well!
I absolutely love the way that Capone's promises to his father play into how he responds to his siblings and also his budding relationship with Fuller.  I also love the way Pandora Pine takes us on a bit of a carnival ride, as the relationship develops in fits and starts... with emotion, humour and reality.  There isn't one single crisis that appears, but more of a series of unfortunate events and issues that make the characters seem real and relatable.
I can't wait to see what Amore Matchmaking does in book 2!
Rating: 5 Stars
Red's Book Reads Review:
This book is just so sweet and amazing, I didn’t want to put it down once I started!
Capone is just so determined and throws his whole self into fulfilling his fathers wishes. Fuller is just so awesome as well with his determination to do his job and serve the community to the best of his ability.
I loved how the two of them worked out their relationship and were able to overcome their various issues and concerns. A really great read!
Rating: 5 Stars
5 Stars Heather Hurt/Comfort matchmaking mature characters Reds Book Reads Series