Ride or Die by Beth Bolden

Beth Bolden serves up the ending to her Food Truck Warriors series with Ride or Die. Read to find out if its a perfect treat. 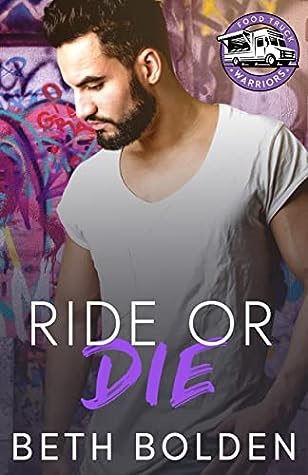 Can Ren’s bad boy heart be wooed and won?

Ren Moretti likes his life—and his hookups—just the way they are: fast and loose.

He only ever hooks up with someone once, and relationships? Forget it. Never gonna happen. No guy has ever persuaded him to bend, break, or alter his one date and one night rule.

Seth has always tempted Ren—but it’s not a secret that Seth won’t settle for just one night. A few dates won’t cut it, and he’s not interested in playing around. He wants it all, and he intends to win Ren’s heart.

But that’s the one thing Ren’s never given up. He guards it closely and fiercely, until one day, when he realizes it’s no longer his to protect, it’s belonged to Seth all along.

Ren, the king of instant gratification, has met his match in Seth, who knows that once wouldn't be enough with Ren so holds out until Ren is ready for more.

The chemistry leapt off the page between the pair and there were a ton of sweet moments. Super adorable with no miscommunication plots. They communicated and it was just lovely.

If I hadn't read Ross and Shaw's book then this would have been my favourite of the series, but I have such a soft spot for Ross.

All of the gang feature throughout so it doesn't work as a standalone. Told in dual POV with no triggers I can think of.

It's sad to say goodbye to the series, but ending it with Ren, serial hookup guy who doesn't want love, actually getting his man was just *chef's kiss*

Ren has been lurking on the sidelines throughout the entire series just waiting for everything to fall into place and get his HEA.  And he still has to wait through a good portion of this book as he and Seth circle each other, vying for what they both want...

Masterfully written, this finale to the Food Truck Warriors series could be read standalone, but honestly, I think you'd miss some inside jokes and the back stories of the couples who interact with Ren and Seth.  Beth Bolden sets this book up to tease and tantalize us as readers and succeeds in stringing the audience along with the main characters.  I'm honestly thinking that Ride or Die is my favourite book of the series and the perfect way to end the stories for this found family group!

"How about about Seth said',  his hand reaching over to squeeze Ren's knee,"we call you the Prince of Feelings?"

Ren and Seth's book was a great finish to the series. It took Seth some work to get Ren to see 'the light'. It was fun to see that they got their books and it was great to see characters from the other books in this final one. I enjoyed this authors writing style. I must admit I have read several books in the series and did not feel I missed background information by not reading all the books to date.