Legally Claimed (Elvenswood Tales #5) by Alexa Piper is a standalone novel in the Elvenswood world. 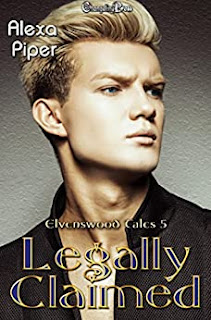 Peter is good at being a lawyer. He also happens to be a vampire, which -- in his experience -- is far less exciting than the books make it out to be. The most romance he gets these days is watching others fall in love. But this vicarious lifestyle isn't something Peter minds or even wants to change.
Theo escaped an abusive relationship and is determined to get his college degree, even if prostitution is how he pays for it. No stranger to the supernatural, he has agreed to let vampires bite him for money, but his first client in the new city is nothing like Theo

I haven't read any of these and though there is mention of other books, Legally Claimed works well as a standalone.

Peter was such a complicated character. At first glance he's a prickly vampire who likes things ordered and doesn't like bother. On a second, deeper look, he's deeply invested in the lives of his friends and is maybe even a little lonely.

The relationship between Peter and Theo develops quickly but it makes sense with the threat over Theo's head.

I loved how Peter gave Theo choices and only used compulsion when necessary. I love when the grumpy one is only sweet for his love.

The steam was balanced nicely with the sweet scenes and there were a couple of funny moments in Legally Claimed.

Come and have a look in the mind of a Vampire in love.

I didn't know what to expect from Legally Claimed, but the blurb got me intrigued. I completely fell for the flow and style of this book.

This was such a great read to me. I really liked the way how MC Peter, a vampiric lawyer is portraited. I love how he is projecting this hard as steel persona, but does anything and everything for those who need his help. I also greatly appreciated the fact that the other MC Theo, student and  human, was not a demure character in the relationship and held his own against his ex and with Peter.