Not everyone can do dark comedy well, but Skylar Sweeney is proving to be a master of the skill. She proves this again in the wickedly dark and hilarious Heart Thief. 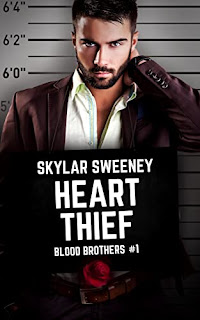 They say love conquers all, but is it more powerful than revenge?

A decade ago, Rex stole the heart of Mason's brother--literally--and Mason has never forgiven the wealthy assassin for taking that transplant. All he wants is payback for his brother's loss, but his every attempt has turned out like a bad prank.

Rex knows what it’s like to live on the dark side, and there’s nothing he loves more than watching his beautiful good-guy with a vengeance play bad. So when Mason infiltrates Rex's black market company, the former assassin is perfectly happy with the idea of this innocently beautiful man stealing his heart away… at least until Rex realizes Mason's really after the newly developed transplant heart that he needs to survive.

Death of a sibling (off-page, past); Mentions of abuse (past, includes sexual abuse); Murder (a lot of references to murder, at least one on page murder)

What a ride! I wasn't sure what to expect when I picked up Heart Thief, but I'd really enjoyed Skyler's Pretty for Master and thought I'd give it a shot. And wow, I'm so glad that I did because I am still laughing over parts of this book - in a way I did not expect from reading the blurb. I did not expect a book about a guy seeking revenge on someone he views as having killed his brother to have me laughing so hard or leaving so satisfied.

But that's what Heart Thief did.

The characters were fun and interesting. We have Mason, a cupcake of a man who is absolutely obsessed with bringing down Rex, because Rex stole the heart transplant meant for his brother, causing his brother to pass away too young. At the beginning of the book, Mason is given the means to infiltrate Rex's company to steal an artificial heart that Rex needs to keep on living. Then we have Rex, a billionaire by day and homophobic assassin by - well maybe not night but in his spare time. Rex has a complicated and tragic history to match Mason's, but is also really charming and a lot of fun and really protective.

Then there are the side characters. The other Blood Brothers are a laugh. Valentine was especially an unexpected treat. I did not anticipate loving him the way that I did by the end of the book and now I'm dying to know his story - including who I kind of hope it will be.

And the plot? The little bit I gave is the absolute tip of the insane iceberg that is the plot to this book. While I called a few small bits, there was no way I could've called how it played out. It kept me reading, flipping pages obsessively to find out what happened next. I said it with Pretty for Master and I say it now - Skyler Sweeney's books remind me of a really insane soap opera in the very best way. This book not only proved that but made it clear that I would read the phone book if Skyler Sweeney wrote it.

Heart Thief is a slightly slow burn enemies to lovers with a dual POV, humor that will make you feel like you're dying with how hard you're laughing, and found family vibes. Like what else could you want? Besides to hurry up and read what happens with the other Blood Brothers - and maybe to turn back to page one and start over to see if you can catch some of those wild plot twists.