Got Me Looking by Casey Cox

From the Got Me Looking blurb: 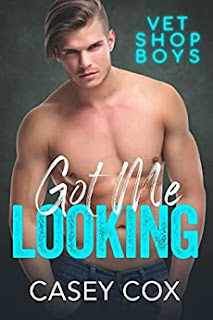 A jilted groom and a guy who doesn't believe in monogamy fall in love? Yeah. Right.
After getting cheated on at my own goddamn wedding, I'm through with men. I'm approaching fifty, and all I've ever wanted is to settle down, get married, and live happily ever after. But yeah, that hasn't exactly worked out great for me.
The last person I expect to understand me is Tate. Sure, he's cute, curious, and clever. A firecracker with no filter who somehow manages to stay friendly and genuine at the same time. But he isn't exactly a settle-down kinda guy. Oh, and did I mention he's also twenty years younger than me?
There's no way something could ever happen between the two of us, so how is it possible that Tate has got me looking at love––and him––in a whole new light?
Red's Book Reads Review:
Gus is recovering from heartbreak by partying his evenings away while supervised by his friends. Tate has no real interest in being tied down and isn’t a fan of the concept of monogamous relationships. What will happen when Tate is asked to check in on Gus one evening when his friends are all busy?
I enjoyed Got Me Looking and there were parts that made me laugh out loud. I had some concerns when I started the book as it is very clear from the beginning that Tate identifies as Poly but these were addressed during the book which I was happy about. This book was a good mix of humour and emotion and I enjoyed it.
Rating: 4 Stars
Sarah C.'s Review:
While I loved Got Me Looking almost as much as I have Casey's other Vet Shop Boys books, Got Me Looking left me slightly underwhelmed. I couldn't put the book down, but there was just some kind of spark missing between Gus and Tate.
It certainly wasn't with the characters themselves. I have loved Tate since book one and have been rooting for him and Gus since then. The attraction between them was evident in the first two books and I was very happy to see it get to play out in Got Me Looking. They balanced one another really well and let each other see beneath the surface.
I even enjoyed the fact that Tate was poly and Gus wasn't, and them trying to figure out how that could work. I think I would've enjoyed that if there'd been a few more conversations between them regarding it. Though I like the reason that they didn't have that conversation easily was because neither felt they should ask the other to change - which thank you Casey.
There was just something missing from Got Me Looking that I can't quite put my finger on, some spark that just wasn't there. Everything else about the book I absolutely loved though and I will happily recommend it to anyone who will listen.
Rating: 4 Stars
Heather's Review:
As characters, I have loved both Tate and Gus through the entire series... Gus, struggling with the pain of loss and heartbreak and betrayal... Tate, the business-minded, up for anything cam-boy... they offer something that each other needs...
As a story trying to reach their HEA, Got Me Looking was a good read - with some sweet parts, some spicy parts, some poignant parts and some funny parts...
***Potential spoiler***
Where it fell flat for me was in the insertion of the polyamory discussion and storyline - especially since the opportunity was there to look at the dynamic and what it could mean... things like explaining compersion, exploring more about Tate's distaste for serial monogamy... I got where Casey Cox meant to go, and if it wasn't something that Tate was studying and unpacking, it may have been okay to be at surface level, but it felt like a cop-out in some way... and I just wanted more... especially since Gus opens the door to the discussion...   I'd never shame a character for self-identifying as anything, but this one just felt like I needed more...
Rating: 4 Stars
4 Stars Age Gap Heather Hurt/Comfort Reds Book Reads Sarah C Series