"Roman spied the rainbow turtle Brick had risked his life to save during the storm sitting in the corner of the deck Safe and sound." 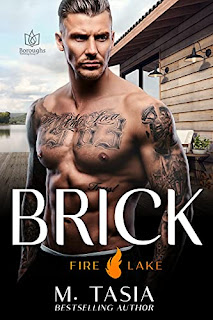 ALWAYS EXPECT THE UNEXPECTED
Ahhh, the good life. Goodbye Navy SEALs, hello rehabbing a rundown lake house he inherited. Being a former Lieutenant Commander will come in handy for Brick Matthews. He gets to boss himself around while tearing down a dilapidated shed and re-roofing his new home, among a hundred other things.
First he has to get rid of the smarmy real estate agent who’s been trying to buy the property for years. Sounds easy, until Brick uncovers layers of secrets, including attempted murder.
In the middle of the intrigue is a buttoned-down CEO with amazing blue eyes.
Roman Furrow is so far from the type of man who hits Brick’s radar, he doesn’t see what’s coming until it’s almost too late.
Having never given away his heart before, Brick is damn sure not going to let anyone or anything hurt the man he’s fallen for. He’s been trained for this – he’ll protect him with his life.
Laora's Review:
Brick is the first book in a new series called Fire Lake by M. Tasia and I am looking forward to this series
The blurb for this book had me intrigued.
Brick and Ramon seem an unlikely pair, ex SEAL and a finance CEO both past their mid 30.
They meet at Fire Lake by Brick his inherited house in the most uncomfortable way. But there is an attraction even then. When they meet again it is Brick who rescues Ramon, after some talking it becomes clear Ramon has had a lot of 'accidents' in the last two year and Brick and his ex-SEAL friends don't think they are accidents at all.
Follow these men and their friends on this mystery and slow burn mm romance with of course a hea/hfn to fins out who is targeting Ramon.
Brick - Fire Lake Book 1 is an easy to read page turner for me. It has some typos and missing words, but that might be the case because I read an arc. It did not put me of reading and presume there was a brush up before the actual release of the book.
Rating: 4 Stars
"
4 Stars Laora mystery Opposites Attract Series slow burn