Jess Bryant is re-releasing Stay a Little Longer, her first ever published M/M Romance now that she has the rights back from the publisher... and you get a bonus novella packaged with it!  Speaking of bonuses, Jess offered us an exclusive excerpt of the book for Teaser Tuesday, but the pre-order link wasn't live and then there were more Amazon issues... so I'm combining everything and giving you everything - my review and an extra special excerpt from the book: 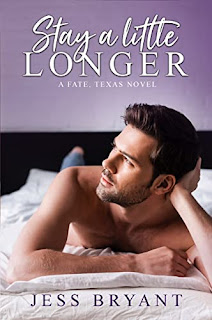 Where do you go when there's no place to hide?
Country music superstar, Trent Thorne is on the run. The secret he's kept hidden from the world is no longer a secret at all. He trusted the wrong person, a man he'd stupidly thought he was in love with, and instead of a happily ever after all he'd gotten was outted. Unwilling to sit around and watch his private life get plastered all over the news, Trent hits the road and somehow ends up in his best friend Lemon's small hometown of Fate, Texas. He only intends to crash there for one night but in Fate, one night can change everything.
Lance Nichols knows a thing or two about hiding. He's so deep in the closet he can't even see daylight. The former womanizer finally admitted the truth to himself a few years ago but he never thought he'd be able to say the words out loud, not to his family, not to his friends, and certainly not to his secret celebrity crush when the guy stumbles awkwardly into his life. But the words come easily with Trent. Everything comes easily with him. Talking, touching and even opening up about all the things he’s never told a soul.
Fate brought these two together, but will it also tear them apart? One newly outed man refuses to go back in the closet. The other can’t imagine coming out of his.
The real world is closing in on their little bubble but before it does, can they figure out how to coexist and be a part of each other’s lives? Can Lance stop hiding and take a chance on love? And what happens if Trent decides to stay a little longer… maybe even forever?
*Released January 2022 will all new BONUS content including Safe, A M/M Sports Novella featuring Trevor Thorne, Trent's baseball playing twin brother. This 20k words story was originally published as part of the Rounding Third Anthology but now both Thorne brothers stories are complete in this deluxe edition.*

Stay A Little Longer is a classic instant attraction/instalove story which takes place over a very short period of time... Jess Bryant is able to capture the characters, setting and the romance and let you lose yourself in the book...

I appreciate the dichotomy of Trent, who was outted without his permission and Lance, who is still in the closet when he meets Trent... this added layer gives the story just enough angst and tension to make the instalove storyline work well.

The Bonus content featuring Safe also feels like an instalove situation, but really Trevor and Rodrigo have been circling each other for a while.. it's a lovely addition to the book and gives us another glimps of Trent and Lance too!

And now for an exclusive excerpt:

Exclusive Excerpt from Stay A Little Longer by Jess Bryant
The guy offered a flicker of a smile.
Oh, hell… Trent would have stumbled backward if he wasn’t already against the wall. That smile was disarming, to say the least. Charming and boyish and fuck, were those dimples beneath that scruffy five o’clock shadow? His dick instantly woke back up.
He’d never considered if he had a type or not. He’d spent so long hiding his sexuality he hadn’t taken many opportunities to indulge. It had always been more about availability and discretion than about out and out attraction.
He’d thought Heath was his type just yesterday. Heath with his big, fit, bulging muscles body. Heath with his golden god-like physique. But he realized now that wasn’t it at all. Because this guy wasn’t a bodybuilder. He was lean with slim hips and a clearly defined six-pack. With dark features and olive skin and the only thing he had in common with Heath was those damn boyish dimples.
Apparently, dimples were his goddamn kryptonite.
The comparison in his head between this guy and Heath made him cringe. It made him remember why he was here, in this trailer, in Fate, and in Texas in the first place. Because Heath had betrayed him. He’d trusted someone because he was attracted to them and it had been a mistake. Now he’d made another, only it was hard to focus on what it was he’d done wrong exactly when he was in a tiny room with a gorgeous half-naked man who was grinning at him now with an air of arrogance that only made him more attractive.
Stay a Little Longer is now available on Kindle Unlimited and for purchase on the kindle app.