Blow Me Away by Billie Bloom

Blow Me Away is the latest book by Billie Bloom and the first one that isn't centered around a hockey player... it's a cute, funny romp to Hawaii with fake boyfriends, bi-awaking and lots of great side characters! 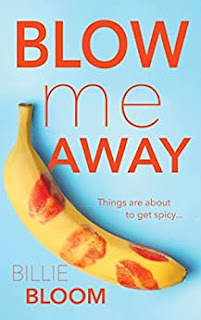 Things are about to get spicy...
Showing up solo to a wedding where his ex is the best man? That's a hard pass, even for the brazen and confident Noah Harper. Thankfully, his bestie has a brilliant plan: Take her straight as an arrow brother Nick as his fake boyfriend instead.
Nick is happy to pretend—a free trip to Hawaii is hard to pass up—but apparently it will cost him exactly one existential crisis when sharing a hotel room with the charming and funny Noah turns unexpectedly...complicated.
Their flirting is starting to feel pretty real and when the suddenly curious hockey jock Nick wants to experiment? Hold on to your lei, honey, because things are about to get spicy!
What to Expect: Fake boyfriends, guy talk, secret experiments, hot as heck first times, a bi-awakening and of course a heaping dose of swoon!

Blow Me Away was the first book I have read from this author but I really enjoyed this book. Noah wants to make sure he isn’t embarrassed at his  sisters wedding so hires his best friends straight brother Noah to be his fake date.

I loved how Noah and Nick interacted with each other and how the potential lasted further than the wedding. This book has it all for me and I was  intrigued from the minute I picked the book up I didn’t wan to put it down. This book really worked for me and I loved how the relationship developed and the interaction between the characters here. Such a great best friend's brother book and I def recommend!

After a slightly rocky start, I warmed into it - I really don't appreciate insulting your bestie as a form of love. Reclaiming slurs is not my thing.

Nick and Noah were fun. I love the fake relationship trope and it was done well. Nick got curious fast but the relationship took a while to develop which worked.

While I enjoyed them together I didn't feel that much beyond physical attraction between them. They had a great friends vibe.

The highlight for me was the lack of family drama. Everyone was really supportive

Fake dating to what happens in Hawaii stays in Hawaii... Blow Me Away is a low angst, low drama bi-awakening fake relationship trope that was well written and schmoopy in a good way.

For me it got off to a bit of a slow start and as a speed reader, I stumbled over the fact that not only were Nick and Noah the protagonists, but Noah's mom was Nora and his grandmother was Nana - and it meant that sometimes I had to go back to catch exactly who was speaking about whom...  otherwise, the story flowed well and I did find the fledgling romance fun and readable.