Because of Ben by Lisa Henry

Marco is the lead singer of a band who is spending time at a hotel before going to see his family. Ben comes from a very strict family and is attending a church conference in the hotel when the two meet and their lives change

From the Because of Ben Blurb: 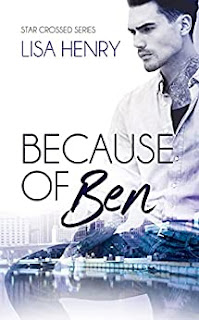 Marco Chase is the lead singer for Static, one of the world’s most famous and successful rock bands. Marco’s bad boy rock star image isn’t just one he’s cultivated for his fans—it’s Marco all over. Marco’s past is full of one night stands, bad decisions, and blackouts. Marco never saw a cage he didn’t want to rattle—and from the moment he lays eyes on him, he really wants to rattle sweet, innocent Ben Selden’s cage.
Ben Selden comes from a fundamentalist Baptist family. Ben is struggling under the weight of knowing that he’s gay, and a lifetime’s teachings that tell him that his God will condemn him, and his family reject him, if they ever find out. With a future he doesn't want already mapped out for him, Ben’s at a breaking point when he meets Marco.
Marco’s teasing, flirting, and obvious interest awakens a hunger in Ben, and he knows this might be his only chance to act on his attraction to a man—if he’s brave enough to risk his future, and his family, to take it. He doesn’t expect Marco to be his savior, but maybe a savior isn’t what Ben needs—maybe he just needs someone to believe in him enough that he’s willing to save himself.
Because of Ben is the second book in the Star Crossed series, where regular guys meet famous ones, and sparks fly.
Red's Books Reads Review:

This was a much sweeter story than I thought it would be and although this is the second book in the series it can absolutely be read as a standalone.

Marco is every inch the rock bad boy on the surface but I love how you learn more about him as the book goes on. Ben is just adorable and I loved his sweet and shy nature and how he still managed to go out and get what he wanted from life. The way his background and family life was dealt with was done well I thought and it struck the right tone for this type of story. I also liked how we got to see a glimpse of Carter and Noah from the first book as well.

Altogether, Because of Ben was a good story and I really enjoyed it.