From the Backslide Blurb 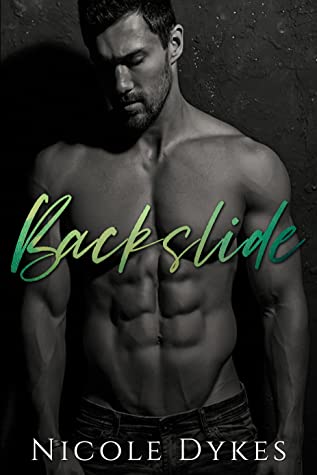 When you’re young, everything seems brighter, more hopeful, and like anything is possible.

Which is great. But it can also lead to so many mistakes.

But what happens when you’re confronted with the past?
Nash Davis is settled and happy, helping his brother and his wife pursue their dreams.

But when his biggest regret comes crashing back into his life, will he have the strength he promised himself he’d have?

Can he keep his walls up? Or will Adrian Walker’s presence be too much?

Will it lead toward an inevitable Backslide to where they began? Or can there be a future after so much pain?

When Nash and Adrian are thrown together in the Ozarks for months, they’re about to find out.

Nicole Dykes is easily a one click author for me, and this book just goes on to further prove why. Backslide's second chance romance between Nash and Adrian burns through the pages, featuring so much pain and resentment from their past that eventually burns away to a real and abiding love that made me so happy and made me eagerly flip through to see how this would all play out.

Nash and Adrian were together in high school. Adrian was closeted due to his father's political career and closemindedness. He had to fit a certain mold, and loving another boy was not a part of that. I won't go too deep into the backstory, because learning what happened between them is a beautiful moment in the book and I don't want to ruin it for anyone. But needless to say, high school love doesn't always work out and there are some feelings when they meet again.

And they do meet again, years later, when Adrian and his girlfriend, Samantha, arrive for a two month stay at the cabins owned by Nash's brother and his wife. Nash lives on property and is a member of staff. The moment he sees Adrian, old memories bubble to the surface. The sensation is completely mutual and the tension between them is immediate and obvious to the reader - and to several of the other characters on page. It makes for a deep and satisfying read, particularly if you like a bit of angst to season your books.

The side characters are all beautifully developed and I love the friendship between Nash and Hayden. Hayden as a character interested me a lot and if Nicole chooses to write more in this universe, I'd be very happy to see a book about him.

Now this book does have a few warnings attached. First, Adrian does have a girlfriend at the beginning of the book. However, they are broken up before anything happens between Nash and Adrian. There are a few mentions to infidelity, but not related to Nash and Adrian. There is also a lot of homophobia from off-screen characters and references to child abuse of another side character.

Backslide is a dual POV second chance romance with a bit more angst than some of my other reads - which I'm not against. I like a bit of angst. The steamy scenes are incredibly well written and I think I saw a bit of smoke coming off my Kindle from at least one of them. All in all, this is an incredible book that made me very happy and ready for Nicole's next offering.

I am a sucker for a second chance romance, especially when a couple finds themselves after a cliffhanger ending to a relationship.  Backslide starts out with Adrian in an uncomfortable M/F relationship (which ends before the main characters get together) and it's his evolution within the book that is the most remarkable transformation.  With triggers for homophobia and some internalized homophobia needing to be mentioned, it doesn't spoil anything to say that Adrian is the product of a conservative political family and has always toed the line...

Nash is also a wonderful character, open and forgiving, with just the right amount of hesitancy to get over...

The balance that Nicole Dykes finds between want and angst, duty and devotion and love and hate makes Backslide a remarkable read with a beautiful HEA.