I love that Rain Carrington wrote Ancient in two versions - being adults, we are reviewing the adult version, but there is a YA version of the book too! 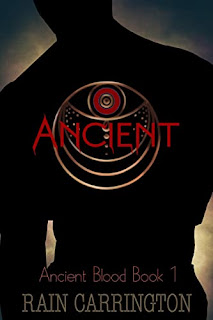 Caution! This is not the young adult version! This book contains scenes of a sexual nature not appropriate for anyone under 18. Please see Ancient, by R. Carrington for the young adult version! Thank you!
In the first book of the series, we meet Adam, sacrificing college to stay in his childhood home for one reason. His sister. Anna is his world, and her safety and happiness is more important to him than his own future. His abusive father makes it hard, but his beloved sister is worth it. Soon, however, with their father out of the picture, he sees that life is no easier and taking care of Anna means doing things that terrify and disgusts him.
The ancient vampire, Neku, doesn’t know exactly how old he is, but he estimates it around five thousand years. In the beginning of it, he felt the sorrow of betrayal, so he never chanced love again in all that time, at least not romantic love. He has a family, a small nest of vampires he’s made and thinks that love was enough for him. Though, for the longest time, he thinks his nest won’t grow unless the younger vampires in the nest make more. It seems that Neku could no longer turn humans to vampires, as his blood is so strong, it boils a human’s brain.
When they meet, Neku is shocked by the color of Adam’s eyes. Is it a sign of the only real threat to ancient vampires? Can Adam and Neku come together in the relationship they both need, or will Adam’s hidden powers tear them apart?
Ancient is an ongoing vampire series from the international best selling author, Rain Carrington.
Violence, sexual content, blood and gore. MA only.
If you are interested in the young adult version, see Ancient, by R. Carrington!

Found family is oftentimes more loving, accepting and protective than blood family. Even when the found family are vampires.

Ancient is a twisting and turning carnival ride of fantasy, intrigue, and romance. A human who has no idea the power he possesses is saved by an unlikely and tormented hero. Learning to fit into his new family, Adam learns how to accept himself and to accept that things are not always what they seem. This pigtail pulling story will keep you on the edge of your seat.

We have one very very ancient vampire who is just tired of the world in general and is ready to “rest” for a couple of centuries when he comes across Adam, who he then “saves” and that’s when the story really gets interesting.  Just to point out - the first few chapters are from Adam’s POV and it’s not pretty – definitely triggers here.

I didn’t quite feel the romantic connection between Adam and Neku (vampire)….. the right words were said, but it just seemed somewhat disconnected.  Having said that, this book isn’t so much about the romance between them ….. it’s more about the overall story – the threat in the background and the plot twists (there are a few !!) and how everything is connected.  This story did keep me well entertained ….but it does end on a cliff-hanger.  Ah well….onto Book # 2 !