All the White Lies We Tell by Garry Michael

on January 22, 2022
All the White Lies We Tell is another flawless read by one of my favorite authors and amazing friend!
From the blurb: 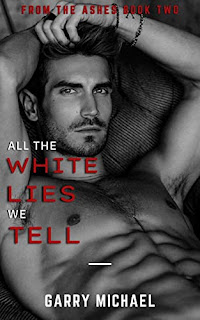 After missing out on the chance to represent the United States in the last winter games, Isaac McAllister’s focus was second to none. He spent the past few years away from his family training for this moment. He had a dream, a dream that only came every four years and he would do anything he could to make it happen. Even if it meant breaking hearts along the way. Olympic gold was the prize, love would just have to wait.
Canadian Foster Donovan Jr. had it all. Money, fame, and good looks. But what his peers truly envied was his natural talent on the slopes. Two-time world champion and defending Olympic gold medalist, Foster would do anything to defend his status as the best of his generation and join the ranks of the greatest alpine skiers. Even if it meant crushing the dreams of the only man he’d ever loved.
What would Foster and Isaac do when the price of their ambition became a heartache for the other?
A dream four years in the making. Two countries. Two men. One Olympic gold medal. All The White Lies We Tell is a story about rivals turned lovers vying for the same glory.
Tatted Book Freak's Review:
The inclusion of sports along with various forms of competitiveness was remarkable. Issac and Foster’s character development incorporating into their competitive sides, was nothing short of amazing and reminded me of why I love Garry’s stories.
“ɪ’ᴠᴇ ʜᴀᴅ ꜱᴏᴍᴇ ᴘʀᴀᴄᴛɪᴄᴇ. ɴᴏᴡ, ᴡʜᴀᴛ ᴋɪɴᴅ ᴏꜰ ᴡɪᴇɴᴇʀ ꜱʜᴏᴜʟᴅ ɪ ɢᴇᴛ?”
Issac’s character was full of insecurities and some humor towards the end. His pure heart followed by his genuine actions, made you feel for his past troubles. And how he just took to Sophia was heartwarming, complimenting his personality.
“ɪ ᴄᴀɴ’ᴛ ᴇxᴘʟᴀɪɴ ᴡʜᴀᴛ ʏᴏᴜ ᴅᴏ ᴛᴏ ᴍᴇ, ꜰᴏꜱᴛᴇʀ.”
I felt for Foster’s character, never feeling like he lived up to his father’s standards. Even with these issues, he still displays a certain cockiness and confidence. His quirkiness away from the spotlight, his true feelings about never being good enough, come to light but he’s also fun and spontaneous.
“ʏᴏᴜ’ʀᴇ ᴀ ʟɪᴛᴛʟᴇ ɴᴀꜱᴛɪᴇʀ ᴛʜᴀɴ ɪ ɪᴍᴀɢɪɴᴇᴅ,”
The explosive smut scenes were everything!! Between the in-depth descriptive words and the blazing interactions mixed with highly suggestive banter, I was completely blown away! Garry never ceases to amaze me with his smutiness, nor his storyline. I give All the White Lies We Tell ten stars for an awesome opportunity to read such an exciting story!
Rating: 5 Stars
5 Stars ARC Contemporary Olympics Rivals sports steamy tatted_book_freak